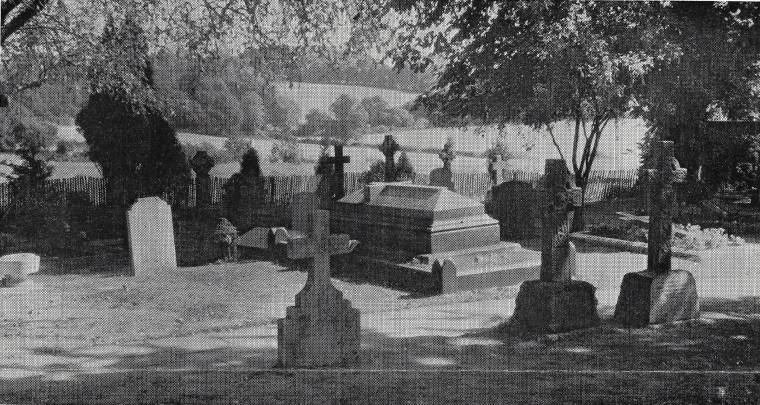 THE OLD CHURCHYARD AT PENN, BUCKINGHAMSHIRE. “The importance of preserving the charm
and peace of the place was recognised when it was found that more space was needed for graves”

CHURCHYARD extensions are rarely things of beauty. The charm of an old churchyard, where the natural good taste of our ancestors is reflected in memorials that achieve harmony in spite of their dif­ferences, is too often marred by an anarchy of harsh mass-produced kerbs and crosses in incongruous materials on adjoining laud. Yet a churchyard extension can be made beautiful, as can be seen at Penn in Buckinghamshire, where a plan that was started almost 20 years ago has been worked out with great care and considerable success. Its example is one that might well be followed by others who are making plans for similar extensions.

The medieval church of Penn stands on a ridge with wide views of the Surrey Downs and the surrounding countryside, and the importance of preserving charm and peace of the place was recognised when it was found that more space was needed for graves. The appropriate site was at hand in an old walled garden on the downward slopes to the south, with access through a brick arch dated 1739, and Sir Edward Maufe was invited to be the architect of the scheme. He was asked to design a layout of the area so that its use for burials could be developed in ways that would show to the best advantage the unique character of the site.

The central feature of the architect’s plan was an axial path of rectangular York stone paving leading southward from the entrance, intersected midway by a similar path running east and west, and flanked on either side by a row of flowering cherry trees. Two further lateral paths parallel with the axis can be added when necessary, and the rest of the ground is lawn with flower borders along the walls. In accordance with the early traditions of Christian burial a central cross of Clipsham Stone, 12 ft. high, stands at the intersection of the paths presiding over the whole space. Its head is carved with a Madonna and Child at one side, and a dove at the other.

I myself had shared in the planning of several war cemeteries during my service as an army chaplain, and knew the value of careful alignment of graves in maintaining the dignity of a plan. To facilitate mowing, it was decided to have only headstones, with a removable metal flower-container sunk level with the turf in front of each. Although there are no rigid limits of size, the headstones have been kept as far as possible to a width of 2 ft. or less and a height of 3 ft. or less. This has made for a balanced appearance through­out, and the avoidance of kerbs and flower­beds on graves has not only allowed the free passage of the mower but has also prevented unsightly neglect when relatives have no longer been able to tend them.

In addition to the space for burials, of which about a quarter has now been used, provision has also been made for memorials after cremations. The paved paths consist of central slabs flanked by smaller paving stones, about I ft. 3 in. by 2 ft. in size. Caskets containing ashes can be buried beneath the turf on either side of the path, and a memorial inscribed on the adjacent stone. There have been about 12 crema­tions since the churchyard exten­sion was started. A sample inscription was provided by the architect so that there should be conformity in the size of lettering and arrangement of lines.

English churchyard memorials have tended to degenerate into ugly and commercialised reminders of death instead of providing worthy commemorations of people’s lives. Yet a churchyard needs an atmosphere of beauty and peace to reflect Christian belief in the life to come. Many of the head­stones at Penn are by a local designer-crafts­man named Darsie Rawlins, who has regained something of the spirit of the 18th-century carvers. With good lettering on English stone, human feeling has been brought to each work, and several memorials have been made more interesting by in­cluding a coat-of-arms or regi­mental badge in the carving. Such craftsmen are rare in these days; their contribution brings aesthetic relief in a field where good sculptors once flourished, but which has become a desert. 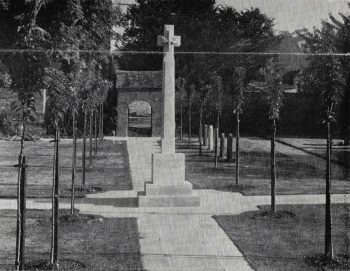 THE CHURCHYARD EXTENSION. “The plan, started almost 20 years ago,
has been worked out with considerable success”

All the details of the scheme, including the siting of future burial spaces have been defined on the the master plan drawn up by a surveyor under the architect’s direction, and approved by the diocesan court. Families are en­couraged to make adequate provision for the upkeep of their graves and the general main­tenance of the churchyard. To guide them, the parochial church council has adopted model churchyard rules, has created a churchyard guild and has established a trust deed for corporate endowment. Th.e parish council will also be urged to make a reasonable contribution from the rates towards maintenance.

Those who do not know Penn may find a visit rewarding. To enter the venerable church and to walk beyond it and see the view southward to the Surrey Downs is to discover a tranquillity worth preserving.

Illustrations: Council for the Care of Churches.