A brief history of Penn Church in Buckinghamshire:

Penn is a lovely old church. People often ask how old it is and the answer, of course, depends on which part you are looking at. Every generation for over 800 years has left its mark, for better or for worse, and the church has both grown and been significantly changed over the centuries. It is the remarkable testament of our many predecessors, a visible history of a country parish recording the passing fortunes, fashions and needs of successive generations.

The earliest written mention of a priest is to ‘Hugh, Clerk of Penn’ in 1183. The oldest part of the building is the nave (the main body of the church), which is late 12th century.   The font and stone coffin also belong to that period. A Vicar, 200 years ago, claimed to have seen the date 1177 on a foundation stone under the chancel and three surviving consecration crosses survive from that time.

The tower (with 4 bells) added, in the early 14th century and soon afterwards, the Lady Chapel and the south aisle were added. 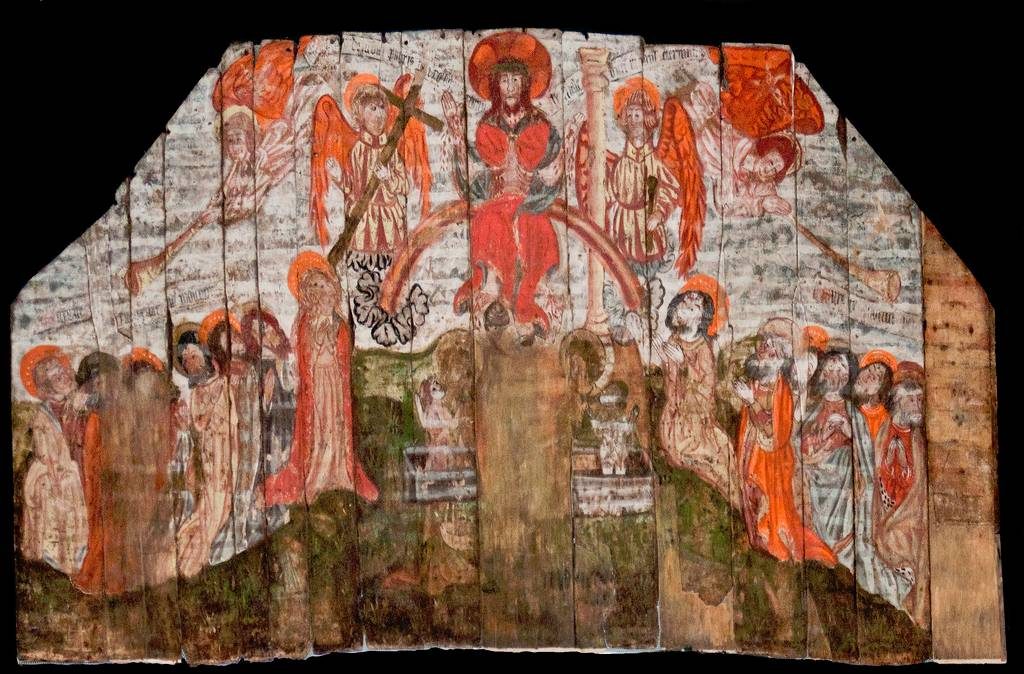 This was a time of prosperity in Penn because of the manufacture of Penn floor and roof tiles and their sale to many of the major buildings in London and the South East, including Westminster Abbey and Windsor Castle.   Medieval wall paintings survive under the whitewash and together with the very rare surviving painting of the 15th C Doom and evidence of a Rood and Rood screen, remind us that for the first 350 years of its life, Penn was a Catholic church.

Chacombe Priory in Northants owned the church and appointed the Vicar for 200 years before the reformation, but lost it in about 1535 when Henry VIII abolished the religious houses and set up the Anglican Church. Sybil Penne, wife of David Penne, the Lord of the manor, was nurse and foster mother to the sickly future Edward VI. She was highly regarded by all the Tudor monarchs and one of her rewards was the proprietorship and advowson (the right to appoint the vicar) of Penn Church. The present Earl Howe is her descendant and still owns these rights.

The Reformation was a traumatic time for the church with all the familiar religious customs and decorations swept away in a flood of Protestant Reform and whitewash. The Vicar at the time was put in Aylesbury gaol by his own churchwardens. A century later the church was reported to be in a terrible state of repair with 7 foot high private pews blocking the central aisle and the chancel, and with a leaking roof.   Some very fine Tudor and Stuart Penn family brasses, some detailing their children, as well as a communion cup survive from this period, as does a drawing of the outside of the church. 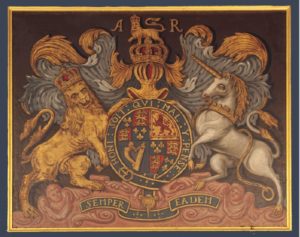 The arrival of John Bennet as Vicar, in 1703, marked the start of a period of renewal for the church. He put in the one handed clock which we still have on the tower and put in 5 new bells in 1702. The royal coat of arms was an obligatory display of Anglican allegiance to the crown, and Queen Anne’s survive to this day on the wall of the nave.

In 1731, the last male Penn died and was succeeded by Sir Nathaniel Curzon, his bother-in –law. There was also a serious fire at this time and the result was radical alterations to the building in 1736. The nave roof was raised several feet and extended out over the south aisle, reusing the fine medieval roof timbers resting on the original carved and painted stone corbels . The chancel and Lady Chapel were taken down to window-sill level and rebuilt in brick with the chancel extended again by six feet to the east with a new east window, and the medieval chancl arch was replaced by the present, much larger, roundheaded arch. The two Ziegler paintings, which can be seen on the cross aisle pillars, record the appearance of the church for the next century or so, a period when the sermon was all important.   The very fine 18th century Curzon and 19th century Howe family monuments still dominate the chancel walls.

William Penn, the Quaker, who founded Pennsylvania, had close connections with this parish. His first wife was living at Tyler End Green in Penn for two years before they were married and he assumed he was related to the Penn family who owned the church. He used the same coat of arms, differenced to indicate a cadet branch. In the 1750s, a vault was dug under the centre aisle of the nave to take the coffins of William Penn the Quaker’s grandsons. In 1797, another vault was dug under the extended chancel for members of the Curzon and Howe families and it was then that the Vicar reported the date 1177 on a foundation stone..

The next major change was the Victorian ‘restoration’ of 1865, in response to the contemporary belief that the church had to be restored to its medieval arrangement. The east wall was rebuilt and a more Gothic window installed, two 18th century galleries and a three-decker pulpit were removed.

In the 20thC, Earl Howe’s family pew in the chancel (still owned by him as the proprietor) with its own private door from the churchyard, was moved into the nave. The two World Wars inspired the painted windows. A High Church Vicar wanted a reredos behind the altar and since this obscured the lower part of the Victorian east window, the present, shorter window was commissioned. The medieval Doom painting was discovered by accident up in the roof. The last of the medieval Penn tiles on the chancel floor were replaced by marble, and the rendering was taken off the outside walls to reveal the beguiling patterns of brick , flint and clunch. The glass screen recording the contentious relationship with William Penn the Quaker was put up.

The 21st century saw the installation of the Octocentenary window celebrating the unbroken line of Christian service over 800 years by the rectors and vicars of Holy Trinity Penn.