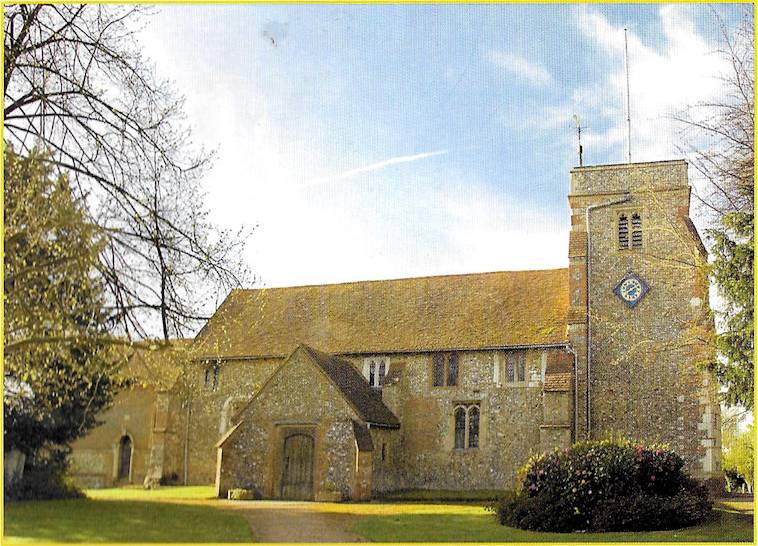 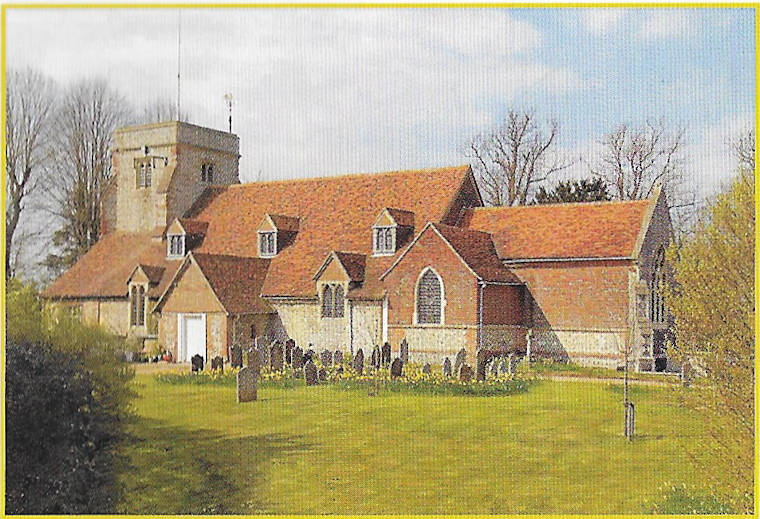 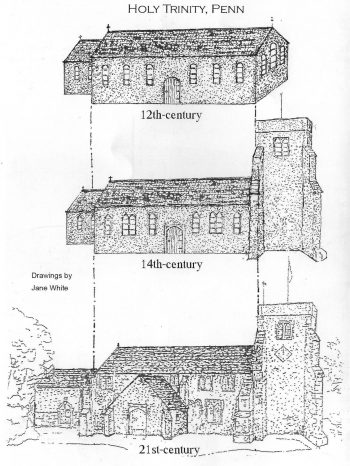 Holy Trinity, Penn is a fascinating old flint church, the only Grade I Listed building in the parish.  John Betjeman observed that ‘within and without, the church has the charm of old watercolours’. People often ask how old it is and the answer, of course, depends on which part you are looking at. Every generation for over 800 years has left its mark in a medley of styles, as the church has changed and grown over the centuries. It is the remarkable testament of our many predecessors; a history of England recorded by a country parish church, illustrating the changing beliefs, fortunes and fashions of successive generations.

The church was sited on the highest spot of ground closest to the manor house (now called Penbury Farm), to which it was linked by a track, still a footpath, which comes out between the cottages on Pauls Hill and heads for the south door. It was set in the middle of a typically Norman rectangular graveyard of one customary acre, generally known as ‘God’s Acre’.

An earlier Vicar recorded that he had seen the date 1177 on a foundation stone under the chancel and the oldest part of the building is the late 12th century (see back cover). Belonging to that same period are three consecration crosses (see front cover), the lead font on a Purbeck marble stem and a stone coffin (see back cover). The earliest written mention of a priest is to ‘Hugh, Clerk of Penn’ in 1183.

The church started as a simple barn-like building – just the present nave, but with a much lower roof and with a much shorter chancel at the east end. There was no tower, aisle or porch. It had the same flint walls, probably with a tiled roof and was poorly lit by only a few narrow single, round-headed windows, with thick glass strengthened by iron bars. There was a rush-strewn uneven earth floor with no seats. Over the centuries, it expanded in almost every direction as the population grew and building techniques improved, allowing larger windows and taller walls supported by buttresses. The roof has been raised twice; first by six, then by three feet, and the windows have been increased in number and altered in practically every century.

The 13th-century saw the change from round-headed to lancet windows and probably the addition of the Lady Chapel in the south east corner with a very narrow south aisle and a south porch. There may have been another small chapel at the SW end of the aisle to house the stone coffin.

The tower (with 4 bells) was added in the early 14th-century and the south aisle widened to its present width soon afterwards. In c.1400, the nave roof was raised by six feet to allow the high level clerestorey windows and to build the magnificent queen-post roof with arcading (see back cover). The heraldic shields decorating the corbels supporting the roof tell the story of the medieval parish. The marks of a high gable on the south clerestorey wall of the nave indicate that a south porch with an upper chamber was added at that time.

The 14th-century was a time of prosperity in Penn because of the manufacture and sale of Penn floor and roof tiles used in most of the major palaces and churches in London and the South East, including Westminster Abbey, the Tower of London and Windsor Castle. An exhibition of the tiles has been set into the floor of the Lady Chapel.

Medieval wall paintings survive under the whitewash. The outline of the entrance to the first low Rood loft can still just be seen. The higher Rood loft entrance has been opened up and reminds us that for the first 350 years of its life, Penn was a ‘Roman’ Catholic church. The chancel had been lengthened by about 9 feet and widened by 3 feet to the south, before the Reformation, probably in the 15th-century. The 15th-century Penn Doom hung over the chancel arch (see back cover)

In 1538, Sybil Penne, wife of the Lord of the manor, was appointed nurse and foster mother to the future Edward VI.  She was highly regarded by all the Tudor monarchs and one of her rewards was the proprietorship and advowson (the right to appoint the vicar) of Penn Church.  The present Earl Howe is her descendant and still owns these rights as well as the pearl necklace given to so  Sybil by Henry VIII and a velvet cap attributed to Edward VI.

The Reformation was a traumatic time for the church with all the familiar religious customs and decorations swept away in a flood of Protestant reform and whitewash. The Vicar at the time was put in Aylesbury gaol by his own churchwardens. A century later, the church was reported to be in a terrible state of repair with 7 foot high private pews blocking the central aisle and the chancel, a leaking roof, broken glass in the windows and cracked paving stones. However, some very fine Tudor and Stuart brasses survive from this period, as does a drawing of the church in the late 1600s, and wall sentencing.

The arrival of a new Vicar, in 1700, marked the start of a period of renewal for the church. He put in 5 new bells and the one handed clock which we still have on the tower. A small choir gallery was put over the south door. Queen Anne’s royal coat of arms in the nave was an obligatory display of Anglican allegiance to the monarch.

The last Penn died in 1733 and his wealthy brother-in-law, Sir Nathaniel Curzon, immediately started to ‘modernise’ the church. A fire burned down the chancel which was partially rebuilt in brick in 1736, longer still with a new east window and a wider, round-headed chancel arch replacing the medieval lancet arch. The Lady

Chapel walls were also partially re built in brick. The roof of the nave was raised three feet and extended out over the south aisle. The Doom, concealed under its Reformation whitewash, stayed in place. The medieval two-storey south porch was replaced by the present one, a vestry was added and a gallery built in the nave over the west door where the organ is now housed.