The earliest brass in Penn Church was originally in the Lady Chapel but was moved in c.1950, to the present grouping of brasses in the south aisle when the World War II memorial was set up by the Rev.Oscar Muspratt. It is to Elizabeth Rok who died in 1540 and shows a woman dressed in a shroud, a popular form at that time, usually quite small as this one is. It is fixed to a slab of Purbeck marble and the style of engraving is of a London workshop of that period.

There is a broken scroll above the head with the words ‘In the day of Judgement, Lorde d(eliver me) The inscription is as follows: 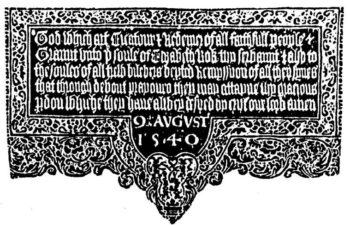 By 1540, Henry VIII’s Reformation had been underway for ten years. In 1538 every parish church was ordered, for the first time, to have an English bible and the wording of the inscription breathes the spirit and language of the first English Prayer Book which was to appear in 1549.

No other mention of this lady has been found so far, but it seems likely that she was the first beneficiary of Henry VIII’s largesse when Chacombe Priory was dissolved in 1535 and so was the first lay proprietor of Penn Church. 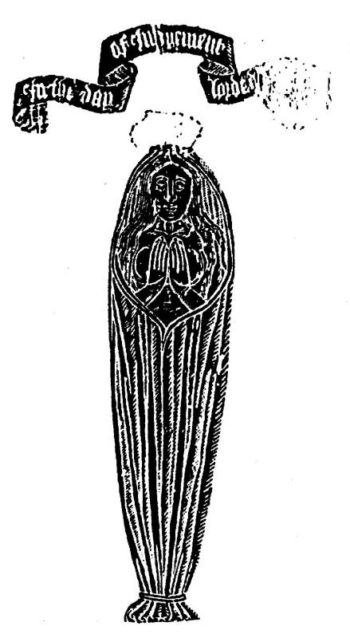 Burial in the Lady Chapel was a considerable privilege and indicates a high status. A search of the Letters and Papers of Henry VIII for this year  should establish this. It was not until the year after she died, in 1541, that Henry VIII granted all Chacombe Priory’s rights and possessions to David and Sybil Penne in recognition of her care of his son, the future Edward VI.

There is no record of Elizabeth Rok’s burial because although churches were ordered to keep a register of all baptisms, marriages and burials from 1538, Penn’s register does not survive until 20 years later. This may have been in part because, in 1539, the Vicar of Penn was himself put in Aylesbury Gaol ‘on account of the utterance by him of certain opprobrious words’. He had presumably been unwise in expressing his view of new arrangements. However, he survived and was suffering from the plague the following year and at some stage seems to have abandoned priestly celibacy for marriage. He stayed as vicar for many
years.