A new chancel designed for preaching

In 1714, Roger Penn had the chancel wainscoted and railed in and gave ‘a new Table, with a purple Cloath, edged round with a silk Purple & Gold Fringe.’ His sister, Martha, gave a crimson velvet cushion bound with a broad gold lace & fringed tassels and ‘a velvet pulpit cloth of the same colour’. Or Mather, the vicar in 1763, gave a new cloth for the communion table with gold and silk fringe, two cushions for the table and two prayer books.

John Bennet, vicar of Penn from 1700 to his death in 1715 (his portrait hangs in Penn House), recorded that he held four communion services every year attended by 50 to 60 out of a total population of 480 (109 families) and that ‘there were many at years of discretion who never communicate‘. There were also ten dissenting families five of whom were Quakers.

The appearance of Penn’s chancel, between the 1730s when it was taken down to within four feet of the ground, rebuilt and extended by some eight feet, can be seen in the Ziegler painting below, of which a photograph is hanging in the church. Roger Penn’s wainscot and rails seem to have survived the rebuild and it is probably his very low table that can be seen covered by a purple cloth, with what looks like a prayer book on a cushion at each end. There was no cross or candlestick on the table and no curtains around or any other embellishment. There were low wooden railings with kneelers in front and wainscot behind, with a fine looking east window showing Christ and his disciples at Emmaus There was no wooden Rood-screen separating the chancel and the chancel arch had been widened and rounded. Typically for an Anglican church of the period, the focus of worship had moved from the altar to the three-decker pulpit, prayers read out to the people and lengthy sermons. 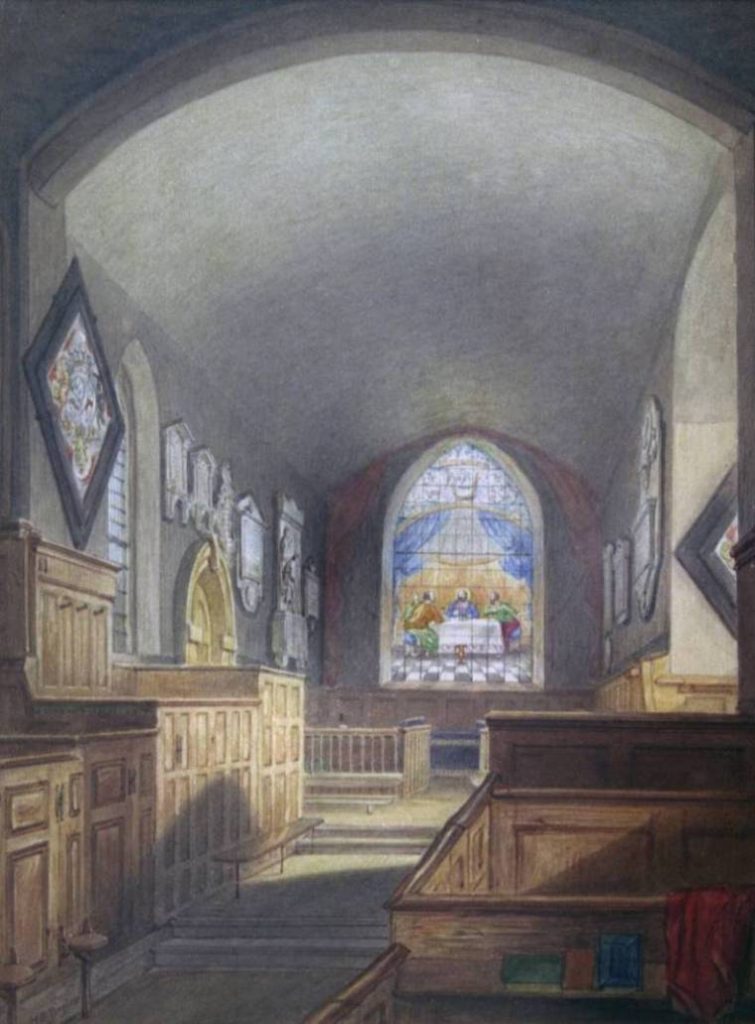 Penn Church in the mid-19th Century, painting by H.B.Zeigler.