1865 – The Victorian ‘restoration’ to remake a Gothic chancel

Major changes were made in 1865. The Oxford Movement was the dominant influence in Anglican church life and they were intent on restoring appearance and ritual to what they saw as the perfection of the 13th and early 14th centuries, removing all trace of any intervening work as far as possible. The intention was to return the focus of the church to the altar at the east end. Fortunately, Penn’s nave and aisle belonged to the correct period and so survived apart from the removal of two galleries, but the chancel was a different matter. Penn’s 18th century east window was unacceptable in itself and was in an unsuitable brick setting (because it was not stone), and so the whole of the east wall was replaced in alien knapped flint containing a new Gothic window. A much larger wooden altar replaced the low table, and a cross and candlesticks were put in place. The 3-tier pulpit was removed and the wainscot taken out. The photograph of c.1925 below, shows the resultant arrangement. 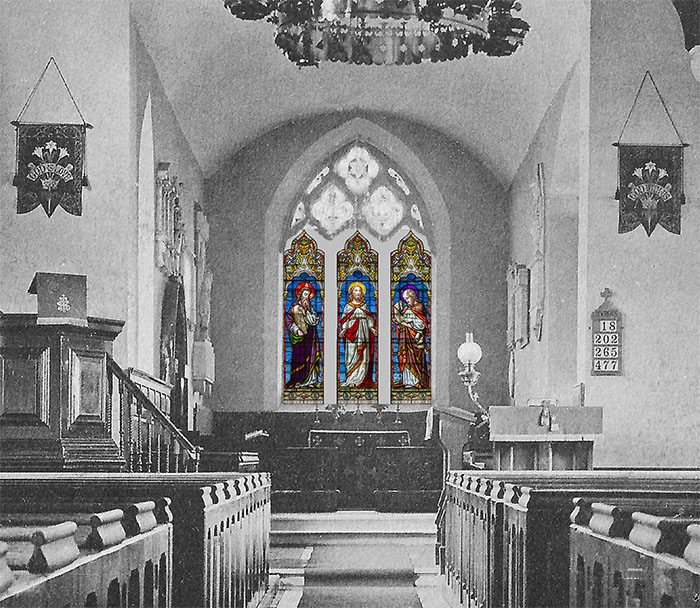 The Victorian east Window from 1865 to 1931, before the riddel posts, curtain and high altar table requred a new, shorter window (reconstruction by Michael Hardy)

Much of what is now familiar to us was reintroduced at that time. Surpliced choirs, crosses, candlesticks, lecterns altar frontals and organs, were all seen again for the first time since the Reformation and in some places were greeted with anti-Popery riots. The 1851 census shows 102 people at morning service and 140 at the afternoon service at Penn, with over 100 in Sunday school. They represented a quarter of the parish. Half the parish was non-conformist, mostly Wesleyan, and a quarter did not go to any church. 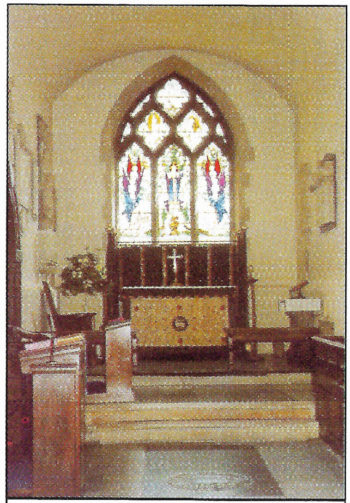 In 1931, it was an energetic new Vicar (Ernest Smith, 1922-1937. Ed.), of Oxford Movement, High Anglican persuasion who first introduced the riddel posts and curtains that we have become familiar with. He must have felt they were very important because they obscured the bottom of the 1865 east window and so he commissioned new glass, using the unchanged stone tracery and putting plain green glass at the bottom of the window. The designer has inscribed a note on glass, which says that if the dossal should ever be removed, there is a design prepared for the bottom of the window. A faculty was granted for the new window design in 1931, but not for the riddel posts and curtains. There is no note of these latter changes in the minutes of the PCC or in their annual reports, but there is reference, on 25th June 1930, to a communion service to commemorate the Oxford Movement – probably their centenary.

(See Herbert Druce’s memories of Penn Church between the wars).

The position of the altar and the priest nowadays varies greatly from church to church, in part dictated by how much room there is and whether the altar is a fixed part of the fabric. Evangelicals still often stand to one side, but in Roman Catholic and many higher Anglican churches, the priest generally stands behind the table facing the congregation in order to enable them to see and participate in what they are doing.

Two major themes come out of this brief review. The first is the truly astonishing extent and frequency of the radical changes that have been identified over the centuries. There is almost nothing in common between the medieval chancel arrangements; those revealed by the 1637 visitation; the 1736 chancel and window shown in

H.B.Ziegler’s early 19th C painting; and those of the present day. There have been at least six different east windows and the altar has varied continuously in size, material and position. The second theme is the religious bigotry, which has so readily vandalised the work of earlier generations – of which the happier consequence is that the church has become a living historical record in which the discerning eye can catch a glimpse of the fashions and beliefs of so many of our predecessors.

Continued in ‘Interesting Vicars of Penn‘.

Continued in ‘Monuments and Memorials‘.