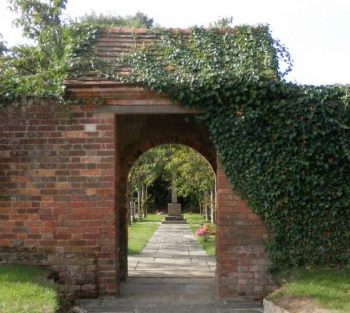 Entrance: Jesus said ‘I am the door’ 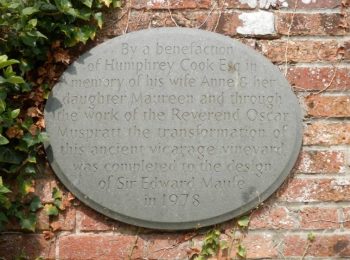 The new churchyard at Holy Trinity, Penn was established on land which had been part of the Vicar’s glebe – his vegetable garden – and earlier still was described as a vineyard. It is probable that the site was identified many years before a firm plan was made to develop the new churchyard.

In a Country Life article, “Harmony in a Country Churchyard“, in February 1969, The Revd. Oscar Muspratt wrote, “a plan that was started almost 20 years ago has been worked out with great care and considerable success”. Revd. Muspratt engaged the services of Sir Edward Maufe to design the new churchyard, following Sir Edward’s involvement in a number of other projects at Penn church, most notably the WW2 War Memorial plaque.

In a parish newsletter in October 1953, Revd. Muspratt reports: “work in the churchyard extension was being carried forward with work on levelling and sowing”. The new churchyard had been consecrated in 1952 and the first burial of Norman Thomson, in what is now plot 20, is dated 1952 and his wife Louisa, 1954, and in the adjacent plot 21, Hugh Nicholl in 1953. 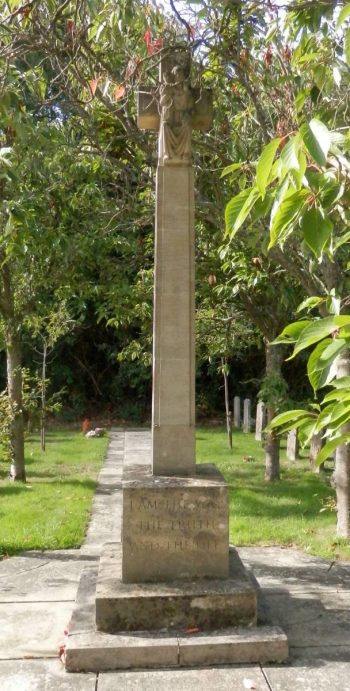 In a parish newsletter c.1961, Revd Muspratt records that plans for the Churchyard extension had been worked out: “For over twelve months an immense amount of careful thought has been given to the intricate task of drafting the scheme for the permanent layout. Sir Edward Maufe has prepared a most attractive ground plan and the sketch of the central cross. These must now be submitted to the Dioscesan Advisory Committee.” The intention was to make provision for the next hundred years. By September 1963 not only had the Faculty been granted but the appeal for funds had been sufficiently successful to enable Darsie Rawlins, a Penn resident and member of the congregation, and a highly regarded sculptor, to start work on the cross that Edward Maufe specified was to be carved in Clipsham stone. Maufe’s attention to detail is illustrated by the fact that he personally selected the cherry trees that were planted as a central feature of the churchyard”. The churchyard cross was consecrated on Trinity Sunday 1964.

The memorial plaque inside the new churchyard, records the final completion date as 1978, some 30 years after the scheme was started.