Before we look away from the site of today’s church let us briefly consider any clue there might be to an earlier church on the same site. The discovery of earlier foundations would of course be conclusive and this should be borne in mind when any work is being done, but the alignment of the present church is also of interest. Christian churches follow the earlier pagan pattern of aligning the altar to the point of sunrise but this direction varies widely through the year, especially in our northern latitudes, and also depends on the height of both the observer and the horizon.

It has been suggested that during the Saxon period new churches were aligned to the point of sunrise on the day of the patronal festival and that the date of the village feast or annual fair (which has been forgotten for Penn) coincided with it. But this does not work for the feast of the Trinity which falls the week following Whit Sunday, which is in turn seven Sundays after Easter and so, like Easter, varies with the lunar calendar.

However, re-dedication of churches at a time of re­building or re-endowment were not at all unusual and the earliest reference to the Holy Trinity in Penn that has been found so far (in the will of Thomas Alday) takes us back onIy to 1505. Although the doctrine of the Trinity was formulated in AD325 by the Church Council at Nicaea, the feast of the Trinity was apparently onIy made general for the Western Church in 1334. It was shortly afterwards, in 1344, that Chalcombe Priory in Northamptonshire was finally confirmed as the proprietor of our church following an appeal to Rome and it seems to have been at this stage that the south aisle and Lady chapel were added. 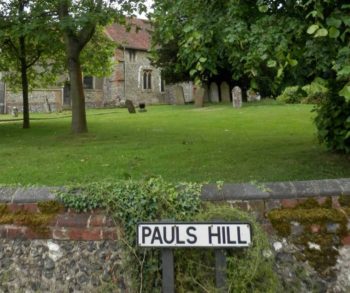 The newly enlarged church would have been re-consecrated by the Bishop of Lincoln, as was required by Canon Law, and Penn’s monastic proprietors may well have re-dedicated their church at this time to honour a festival that was in vogue. Holy Trinity is an unusual dedication in Buckinghamshire and there are onIy two or three early examples. On the other hand, St. Paul was a popular dedication and the names of Pauls Hill and of the farm Old Pauls, whose fields (which included the present vicarage) lay to the east of the lane and were bounded by it, could indicate an earlier dedication. St Paul had two feast days, 25 January and 30 June.

I have long had in mind to check when sunrise is aligned with our church, perhaps by observing from the tower with due allowance for an original ground level observation, or by taking a compass bearing of the alignment and laying it out on more open ground. Any ideas would be welcomed, and particularly from those living nearby, an idea of roughly what month we should be looking at.

The alignment of burials is also of interest. It was important that the dead were buried with their feet to the east, both like Christ in the tomb, and to be ready to meet him coming from the east on the day of judgement. Graves were therefore aligned with the church and the discovery of any sufficiently old burials on a different alignment would suggest an earlier church.