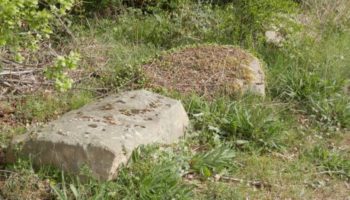 Large sarsens or sandstones, like those that line the track below Church Knoll, were often used in pre­-christian religious sites and there is, in fact, a local tradition of a circle of Druid stones on the Knoll. One version says that the stones were hauled up Crown lane (where several apparently littered the roadside until it was widened) to start a new church, but that most of them walked back home every night. In another version it was the Devil who dragged them back. This type of legend is not peculiar to Penn and is fairly common elsewhere.

Sarsens were particularly useful and valuable to early man because they were the only large stone in the south of England that was easily accessible, very strong and could be moved by hand fairly easily. Fred Payne, my former neighbour, explained to me the technique still practised by farmers at the start of the century when they had to dig these stones out of their fields. They dug under the stone and by balancing it on a series of wooden poles were able to swing it around and slide it along relatively easily.

Sarsens could be very large, one quarried for Windsor Castle, was 15 feet long and weighed about 50 tons. Together with pudding stones (a sarsen matrix surrounded by pebbles or roughly rounded flints), they are found all over the Chilterns and were mapped in 1952 by Dr. Morley Davies and Dr. Arnold Baines. They gave Chesham its name (Ceastel, a heap of stones), as well as Honor End (hon, whetstone), Stony Green and Ibstone. Stonehouse, in Church Road, was so called in the 17th century but the name is probably very much older and presumably refers to the plentiful sarsen stones found there. 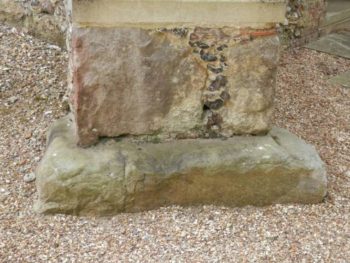 Sarsen in base of Penn Tower

The stones are to be seen in or near the churchyard and/or in the foundations of the towers of fourteen Chiltern churches including Penn, Little Missenden and Amersham, as well as Chesham. They often marked parish boundaries as at Widmer Pond where a large stone marked with a cross lay on the Penn and Tylers Green border until 1973. There was a five foot long stone on Winchmore Hill common near the Village Hall which was apparently dug up when Horsemoor lane was widened in 1912 and now lies on the far side of the common.

Farmers had been finding these stones in their fields over the centuries but in 1952, Fred Payne, who was living in what was then an estate cottage on the Knoll, dug a cesspit and found four large stones stacked one on the other as if they were roughly stepped.

Then two larger stones were unearthed by the Electricity Board when putting in a cable along the track running past the house. In 1974, the new owner, Freddie Griffith Jones, doubled the size of the house by adding a new west wing and put in a new driveway and garage. During construction, 46 stones of varying size were dug up from various depths. The contractor, Mr. C. Bristow thought they were randomly scattered but the digger driver, Charlie Sawyer, found what he remembered as a circle of large stones about two feet down, of about nine foot diameter with a small hole at the centre which was black, he supposed from a fire.

This was the story I put together in 1982 after talking to all concerned and I was very excited by it. Knowing that Pope Gregory in AD 601 had advised that new Christian churches should incorporate pagan monuments in order to borrow their powerful associations (which may well have been the case at Chesham), my imagination was allowed full rein (despite disappointing scepticism from experienced archaeological friends) and I did my own dowsing and digging which, as I thought, confirmed my theories.