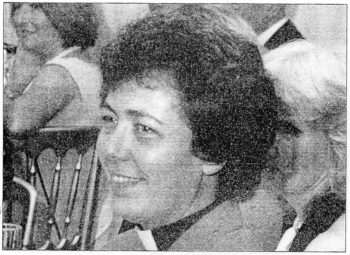 Carol joined Holy Trinity in November 1997 as Priest in Charge and the comment above refers to her hobby of walking. Not only does she walk round the Parish and locality but on her holidays she is walking around the south westal coast route which is 500 miles. A little each year!

Carol was born in Surrey and brought up in Chingford, Essex. Her career has been mainly in personnellhuman resources and with British Gas. In 1991 Carol was seconded to the Senior Managing Director where she stayed until 1993. At that time she joined the Institute of Citizenship and later became Chief Executive. Set up in 1986 its aim is to encourage and promote responsible and participative citizenship within society.

Carol’s first Christian experience was when she cried seeing Jesus on the cross in a comic strip when she was 8 years old. Why did they kill such a good man? she thought. For her ninth birthday she asked for and received a Bible and a Book of Common Prayer. ( God moves in mysterious ways.) A R.I. teacher deepened her interest and this led to Carol’s confirmation at 14. Carol’s family were not Church going Christians; her father was a natural philosopher and her mother an upright, honest and good person.

Carol had vocational thoughts at this time but the opportunities were limited to a convent so she entered the commercial world where she lived out her faith, a hint of her current Non-Stipendary role.

Carol moved to High Wycombe in 1978 and settled into St. Mary’s, Beaconsfield where she found Revd. Mark Fitzwilliams a stimulating preacher and pastor. He had the wisdom to allow her to come ‘just on Sundays’ until she joined the choir. Meanwhile her faith deepened. After two special experiences she became able to offer her whole life to God. This lead to her offer to work for the Church in 1985 and Carol was accepted for ordination training in 1986.
After wise counselling by Bishop Simon towards Non-­Stipendary Ministry Carol trained on the Oxford Ministry Course. On ordination in 1989 Bishop Simon asked Carol to move to All Saints Parish Church, High Wycombe. Following legislation Carol was ordained Priest in 1994. This was a truly overwhelming experience with the excitement and joy among the huge congregation.

Carol’s greatest joy is to help people on their spiritual journey. She considers it a privilege to be alongside people when they have a need. There is a sense of helplesness but through God she can feel and offer love to them.

The downside is the administration. It is a hindrance to her real work and she is therefore very grateful for all the help she receives.

I have mentioned a couple of times that Carol is a Non­-Stipendary Minister. What this means is “Carol is not paid!”

Every parish would like a fuly paid Priest but it is not possible, according to the management! People like Carol give freely of the gifts they have been given by God. It is hard work. It is not an easy life but as the letter on page 2 comments upon, it is no surprise to Carol and she accepts the work she must do.

Carol during her time at Holy Trinity has introduced change and helped the congregation develop its own faith and worship. There has not always been harmony and the role of a Minister is to help each of us to find their our own contribution