The Rev, Oscar Muspratt has been a country churchman for the last 44 years.  His parish is the sleepy village of Penn. A quiet life one may think – seeing to the weddings, baptisms and funerals of his villagers. But behind this genteel façade stretches a life of excitement, heroism and adventure.  Mr Muspratt has climbed mountains, preached in the wilds of Australia, picked pineapples in Queensland and tended the dying at the siege of Malta in World war Two.  Indeed his war service is impeccable.  Mr Muspratt served, often in hazardous conditions, as a chaplain in the army. He was at Dunkirk, El Alamein, and joined the famous 51st Highland Division for the invasion of Sicily and later the D-Day landings in 1944.  After the war, he kept his taste for excitement and the unusual.  He buried the arch-traitor … Maclean … And he conducted the marriage of Capt. Robert Lawrence, the controversial author of the Falklands play Tumbledown. Over the next three weeks, Andrew Neish maps the intriguing life of this fascinating man.  Here is the first instalment tracking the adventurer’s life from Jersey to Australia and the turning point in his life where he devoted his life to God.

THE YOUNG Oscar Muspratt never knew a quiet and cosy childhood. He start­ed life as he meant to go on -with an irresistible taste for adventure.
At the age of only seven he helped his father run a fishing business from their home on the island of Jer­sey. His early years were unortho­dox and, at times, dangerous.  His father Frederic led the way in flouting conventions. He had once been a parson himself but fled to Jersey to escape the tedious restraints of church life. On the grey waters off Jersey, Oscar’s story truly begins ….


“My eldest sister Mona and I would go out on the 30-foot fishing boat that my father had built himself,” he recalls.  “It could be quite dangerous out there. There were conga eels six feet long that could take your hand off with just one snap.  “Sometimes it was so foggy on the water you could hardly see in front of you at all. “We could have been ship­wrecked a number of times especial­ly as the sea hid miles and miles of dangerous rocks.  “But that was the risk we naturally took every day.”


Oscar’s father had no qualms about teaching his young son the finer points of a rugged outdoor life – the hard way.  “My father never pampered us when we learnt new things. He would teach me to swim by dangling me over the side of the boat by a rope – and this was in very deep sea­water”.  These early adventures stood the young Oscar in good stead for his later life as a vicar and an army chaplain. 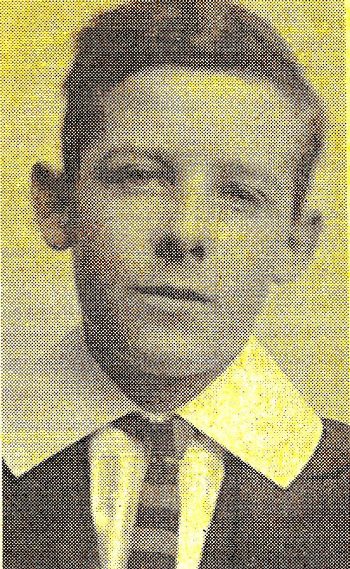 “I was always dealing with hard­ship as a child. It was during those years that I learnt to face danger. And the fearlessness I needed later on in life developed.”
The independent life was valu­able in other ways. Oscar would have to lug a heavy basket around houses in the hope of selling the lob­sters his father had caught. “Again this knocking on people’s doors helped me develop this tough­ness and fearlessness I would need later on as a parson.    I would have to talk to all sorts of people I had never met from different backgrounds.  “Mind you – I did look rather sweet in those days, I actually had some hair then! It was a mass of curls and I had bright blue ‘eyes; “This probably helped me make my sales -to the ladies at any rate!”.


Oscar knew the hardships of being short of money and the dangers of a fisherman’s life. But there was laughter and schoolboy pranks as well.  His family were staying in St Helier by the local vicarage while his father and brother Eric were working in America.  “I was great friends with the vicar’s son Victor. We got up to all sorts of mischief,” he says.  “In winter we used to pour buckets of water on the pavement outside the church to make it slip­pery in the hope that people would faH over. But it never seemed to work!”


But the greatest hardship was to come. When Oscar was only eleven, his 19-year-old brother, Freddie, was killed in action in one of the First World War’s bloodiest battles, the Battle of the Somme.  “I was devastated. He was so young. It had a huge effect on me,” remembers Oscar.

But brighter things lay ahead. The family moved to Australia in 1920. A new life … and new chal­lenges.  Brother Eric took over an aunt’s pineapple plantation at Woombye in Queensland. Oscar and sister Mona helped out. The work was tough and ceaseless.  “We toiled morning noon and night, hoeing and weeding, and picking the fruit.  “The weather could be very ad­verse. Sometimes we could have a foot of rain in 24 hours and we would be holed up.”  In that wild mountainous region lurked many dangers – not least from deadly snakes.’ Mr Muspratt says: “There were snakes called Death Adders that used to hide in the long grass. But never seemed to be restricted by such dangers. We would run through the grass with our trouser cuffs rolled up.”


Oscar’s next project was to run a dairy farm near Melbourne with his sis­ter. They looked after 24 cows for 18 months.  Up to this time, Oscar’s education had been sparse and intermittent. But university lay ahead and he had to think of way to earn his fees.  Again the outdoor life beckoned. He harvested wheat in New South Wales and drove a 16-horse transport wagon to the station with ten tons of wheat at a time.  Oscar, found a job as a docker in Mel­bourne when he was 19. The work was tough and dangerous.   “Once I was working in the refriger­ation hold of a ship transporting mut­ton and a carcass came loose from its sling and fell 50 feet, landing right next to me.  If it had been any closer, that would’ve been the end of this story, “The men I worked with were tough But so friendly. I learned a lot about people and life on the docks of Melbourne.”


But Oscar was soon to learn a far more important lesson. He had been studying chemistry and ancient at Melbourne University.   At that time he had thought little of God. He had attended the services of a visiting vicar in the Outback but that was all.  But on a summer job wheat harvesting in New South Wales, he had an acci­dent that would change his life and finally bring him to God.”   He was driving a waggon-load of wheat to the station. The team of horses was startled and he was thrown under the wheels, badly injuring his left leg.  Oscar struggled back on and – despite the severe pain – made his own way to hospital.  He lay there for several weeks while the muscle which had been torn from the bone healed.

Mr Muspratt remembers: “To have agonising pain is an experience of a lifetime.
“Lying there bearing the pain made me realise the pain that Jesus must have felt on the cross. It made me think about my life.   “It was a matter of bearing that pain and sharing it with Him and somehow I felt closer to God.  “But nothing happens in isolation. The accident was only a one of several ‘. factors influencing me.  “After I left hospital I went to a church Christmas service and all the childhood memories of Christmas and associations with the Church came back.  “Also I had been attracted to’ the work of one or two of the preachers at university. Oscar switched to theology at university and went on to offer himself as a missionary in China.   “I wanted to preach but I still wanted adventure,” he remembers. “But the Chinese government closed the country to missionaries and I had to think of something else.”  With the door to China closed to him, Oscar was to use the rich learning experiences of earlier years to preach to the poorest and richest of Melbourne’s Christians.

This new phase in Oscar’s life was to mean, inevitably, new adventures.