In 1721, only a few months after his furious argument with his bishop about his refusal to bury a ‘non-Con’ (a non-conformist, in this case a Presbyterian child), Benjamin Robertshaw records in his memoir that he became Curate at Amersham for the Rector, Or Brydges, whilst staying as vicar of Penn, ‘which I did against the Bishop’s will‘, using the licence he already held as Deacon at Amersham. 1 The Bishop did not recall the licence, in part because he knew that Robertshaw was also chaplain to the Earl of Scarsdale, ‘of whom he stood in some kind of awe‘. Or Brydges was also Archdeacon of Rochester, presumably appointed by Francis Atterbury, the Bishop of Rochester, who was an ardent Jacobite, banished in 1722 for his plotting to restore the Stuarts.  Robertshaw also had a powerful ally in Roger Penn, the lord of the Manor and his Patron, a near contemporary at Oxford and, judging from Robertshaw’s memoir, a good friend, sharing a common view.

Robertshaw was well-educated, his memoirs include the occasional classical quotation, and he was clearly popular in High Tory circles. His uncompromising certainties probably made him a powerful preacher – ‘First find out the Will of God, in any point of duty, & learn what is right & true, (for truth is always but one thing & so easier to be found, whereas Error is various and endless).’ His final verdict on his quarrel with the Bishop was : ‘God forgive all that was amiss in this controversy, either in the Bishop, or me; I was perhaps too warm: But I am sure I meant well; & spoke nothing but my real sentiments, in a stile natural, free, & unguarded; tho’ if I had thought more, to be sure I had writ less. ‘ 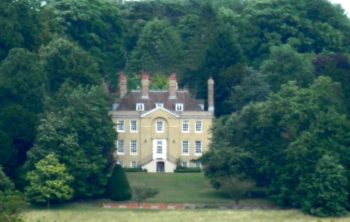 Much of his memoir deals with Amersham and his relationships with the Drake family. He included an account of the ‘Honourable Family of my best friend & Patron Montagu Garrard Drake’ and refers to Queen Elizabeth’s stay at Shardeloes. He was bequeathed £700, as Rector of Amersham, with which he bought Stock Place Manor and Farm to provide him and his successors with about £20 pa additional income. He also built a lovely seven bedroom Georgian Parsonage House and moved into it from the town in 1736. It is now known as The Old Rectory and is currently on the market for £3 million (2004). He rebuilt an old house in the town, at his own expense of £220, for the Schoolmaster of the Grammar School founded by Dr Challoner.

His memoir brings home how closely intertwined were church and state and     how strongly the bitter memories of the Civil War and the Revolution of 1688 continued to dominate political and religious controversies well into     the eighteenth-century with violence and civil war very close to the surface. He described Whig Justices, to whom he preached an Assize sermon at Aylesbury in 1707, as talking bitterly against Monarchy and Episcopacy and told of one ‘whose sullen inexorable temper makes even his mercies to be cruel‘. He later met and argued with this same Justice at a friend’s house in Amersham and remembered, ‘I so far ruffled the hot and heavy lawyer, that he was put quite off his guard and let fall some rude, illbred expressions or reflections upon Queen Anne‘, with the result that their hostess ‘never afterwards admitted him into her house. He saw ‘Whigs and infidels’ who took their arguments from Reason rather than Revelation, as the successors to the Puritan Preachers of Elizabeth’s reign, who had ‘such a malignancy towards     Monarchy and Episcopacy … as have     proved highly pernicious to great Britain in general; & are so still‘.

1 Dr. Brydges was later advised to go to Bath for his health and Robertshaw observed ‘whither the London Physicians commonly send their Patients to be out ofthe way, when they can get neither more money nor reputation, by attending them at home.’

Continued in ‘Monuments and Memorials‘.