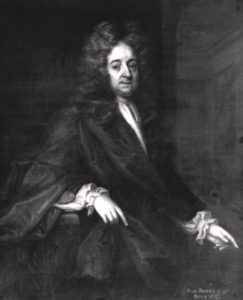 We leave the Curzon family for the moment to have a close look at a large marble monument on the east end of the north wall of the nave of Penn Church. It hangs above where the organist plays and was put up in memory of Daniel Baker and his wife Barbara. He was a very prosperous  merchant and Alderman of the City of London. They provide an interesting illustration of social mobility in England since their younger daughter, Elizabeth, married Sir John Verney of Claydon, who later became Viscount Fermanagh; their only son was High Sheriff of Buckinghamshire; and their grand-daughter was the mother of an Earl. 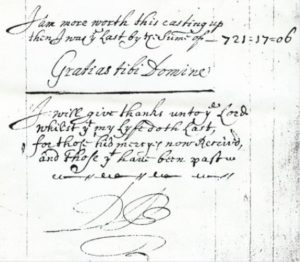 Many years ago, in the Greater London Record Office and History Library, I struck gold in finding a cache of his papers which brought him to life and demonstrated both how prosperous he was and his awareness and gratitude for his good fortune. There was a note of a £2,000 dowry he paid when his elder daughter married. This is equivalent to £3.7m today*. There are also examples of his  annual ‘casting up’. By 1690, he was worth £19,591 (equivalent to £37m today) held mostly in ‘howses’ which he leased and in mortgages and loans he had made. After each casting he generally noted how much more he was worth than the previous year and added a verse of his own  composing in thanks to God, such as:

To God I give my hearty thanks, His name be ever prais’d:
Who me from small beginnings, hath, most wonderfully raised

The monument, put up by his three children, says he died in 1700 ‘in hac villa’, ‘in this town or vill’, presumably meaning Penn, but whether he lived here is not known. He does appear in his son’s diary in an entry in 1698 which records walking in the garden with ‘my Dear Father Baker’.

Amongst his papers there is a note from a ‘Scrivener’ in 1693 asking if he was interested in purchasing a  Buckinghamshire estate consisting of five small farms totaling 537 acres for £196, with a further 55 acres of woodland at 7s 6d (£750 today) per acre. He could of course readily afford the purchase and the fact that he had kept the papers suggests he may well have bought the estate.

When he died he was ‘lamented by men of Goodwill‘ in the City and was buried at Penn. Unfortunately there is a gap in the parish registers at just that time, but the monument records that husband and wife were buried together and her burial at Penn ten years later is recorded in the register.

* See a useful website ‘Measuring Worth’ on the Economic History Service using both average earnings and RPI. I have used the average earnings figure which is always much higher than the RPI comparison.