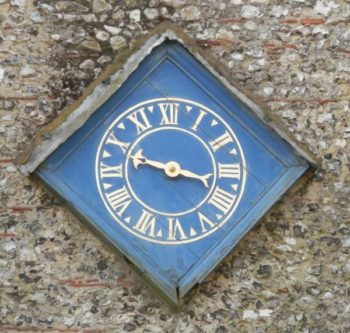 On the north-facing wall of the tower is a rare example of a one-handed clock. It was put up on 17 April 1715, ten months before the death of the Rev. John Bennet, the very active Vicar whose achievements we are outlining. We know this, both from a note by the Vicar in the parish register and from the clock itself which has inscribed on a brass dial: 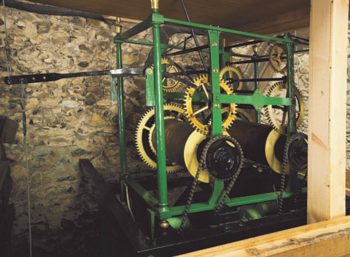 Mechanical striking clocks have a much longer history than one might think. The first recorded example in England was in 1352 on the Great Tower of Windsor Castle. By the 15th-century, ‘turret clocks’ as they are called, were common on larger churches. There was one at Aylesbury in 1490, at Wing a few years later, and even at small places like Haddenham before 1552. By 1638, they are recorded in churchwardens’ accounts in at least 33 parishes in Bucks. Unfortunately, Penn’s accounts do not survive for that period. Our clock mechanism has what is called an ‘anchor escapement’ which means it was made after c.1670.

The long pendulum was invented c.1660. The resulting greatly increased accuracy meant it became worthwhile to have a minute hand, and by the 1670s they were in general use. Our one-handed clock with a long pendulum was therefore some 40 years out-of-date by 1715 and it has been suggested that it may have been transferred from another church. Richard Carter may therefore have installed the clock rather than ‘made’ it, which could explain why his name has so far not been found in the records of clock-makers. (Update – below) 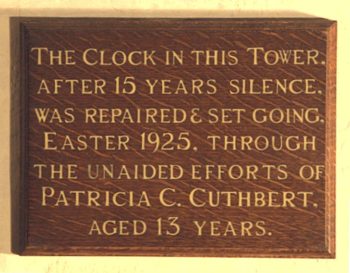 The mechanism was repaired in 1925, after 15 years of silence, at the initiative of Pat Cuthbert, who some of you will remember. She was then only 13, but, unaided, raised the necessary £25 by making and selling baskets. In 1979, there was a far more radical overhaul at a cost of £850. The weekly task of winding up by hand the two very heavy weights which dropped through some 32 feet was replaced by electric winding gear. The mechanism remains entirely original and keeps good time to within half a minute a week. It all now sits inside an oak case given in memory of Frank Perfect (1894-1976) who was responsible for all repairs to the church for 50 years. The clock was featured on a live radio broadcast striking the hour for Britain’s first general election after WWII.

Grateful thanks to Michael Bayley, who looks after the clock and the bells, and Geoff Mansfield, a local clock restorer, for their expertise and advice; and to Eddie Morton for his excellent photographs.

In  my earlier article about the church clock I noted that it is inscribed ‘Richard Carter att High Wycombe fecit’, but since there was no record of Richard Carter as a clock-maker and a one-handed clock was already so old-fashioned when it was installed in 1715, I suggested that maybe he didn’t actually make the clock, but merely transferred it from another church. 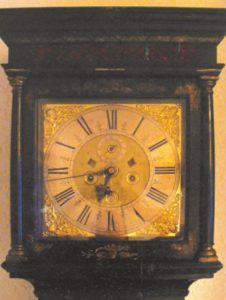 I have since been contacted by a clock enthusiast who has a very fine grandfather clock, dated to c.1710, and complete with a minute and even a second hand, which is inscribed ‘Rich Carter’ and ‘High Wycombe’. So he clearly was an expert clock-maker working in High Wycombe. The mystery remains, why such an old-fashioned design for our church clock? 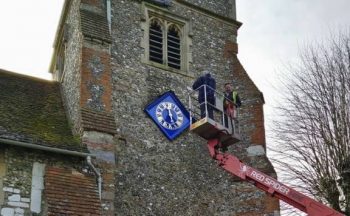 In April 2016 Miles Green and Michael Bayley inspected the unusual single-handed clock dial on the north wall of the bell tower and reported it was rotten. During that year a number of specialists were called in to submit estimates for its repair/replacement following which the PCC agreed to ask Edward Stuart, BADA Dipl., CGLI Cert., of Curbridge, Nr. Witney, to carry out the work, once a faculty had been obtained from the Oxford Diocesan Registry. In September 2017 the Faculty came through and within days the old face had been taken down and whisked away to Curbridge. As the experts had predicted the woodwork of the old face was so rotten it needed to be replaced entirely. As an aside, although the clock mechanism itself is dated 1715, the face was thought to be from the mid-twentieth century which due to its exposed north-facing position and water overflowing from the blocked hopper above, had done its time. 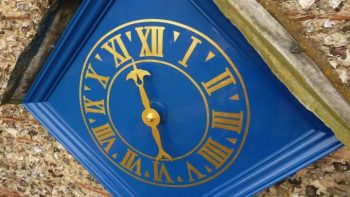 Edward Stuart and his craftsmen made a new, more solid face in thick marine ply framed with hardwood mouldings. This was then painted in weather resistant paint in blue to match the original and finally the numerals and the pointer were gilded with 24 carat double gold leaf.


Thanks to Bob Graydon and his Red Spider lift which obviated the need for scaffolding, the face (an exact replica) was installed on 8th February 2018 and Revd. Mike Bisset was taken for a fly-past inspection.