In the same entry in the Parish Register, dated July 8th 1709, in which he records that ‘The Arms of Queen Anne were hung up’, our energetic Vicar added the note, ‘& the Sentences in the Church were writt, and new Painted’. 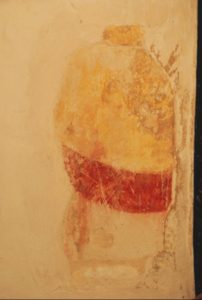 From the mid-1500s onwards, after Henry VIII’s Reformation, Protestant zeal regarded the coloured paintings which adorned the walls of every village church as idolatrous, to be white-washed over. Later, in Elizabeth’s reign, scriptural texts were painted over the white-wash.

Clive Rouse, a national expert on medieval wall-painting, who re-assembled and conserved the Doom painting, reported that after the walls of the nave had been cleaned and peeling distemper removed, in the early 1950s, ‘considerable evidences of painting were found’. In particular, ‘traces of a probable 15th-century wall-painting were found on the south wall, but unfortunately it was not considered possible to restore it as so much had been removed in earlier repairs to the church’.

Ann Ballantyne, who started her career as a conservator of medieval wall paintings by assisting Clive Rouse, inspected our only visible wall paintings in the area behind the pulpit in January 2002, and reported that there are four visible layers and likely to be more still hidden. According to Clive Rouse, a well-cared for church was redecorated every 25 years or so.

The four layers are:
Medieval – The red band is part of a very typical medieval decorative dado pattern, representing a skirting along the lower part of the wall. They were able to be placed lower on the wall because they were not holy like drawings of saints etc, which had to be protected, high out of reach. There is also a typical six-petalled (sextile) flower. 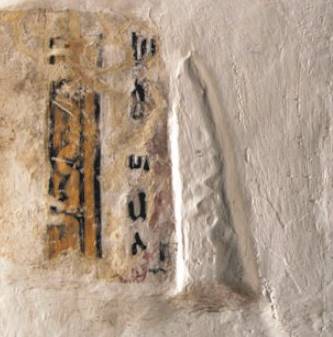 18th century – The Lord’s Prayer. Parts of ‘Trespass against’ can be read, and this is almost certainly one of John Bennet’s contributions in 1709.


Indeterminate – Another layer of script.