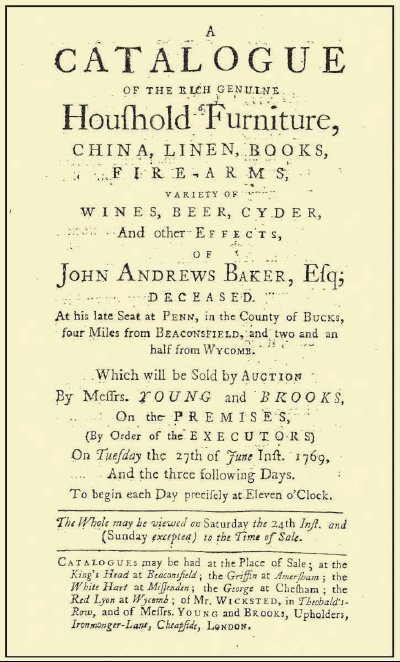 We have seen that John Baker Holroyd, a Baker nephew who was eventually to become Earl of Sheffield, inherited the Baker estate in 1768. He sold the ‘mansion house’ the following year and there was a grand sale of all the contents of the house for which a sale catalogue recorded every room and its contents. This is ‘Tylers Green House’, which nearly 30 years later was to become the French School.

There were 5 rooms on the top floor of the house. The Bleu Garrett, the First Garrett, the Back Garrett, the Nursery Backwards and the Maids Garrett where they kept 32 buckets in case of fire.

The principal bedrooms were known by their colour or furnishings; the Red Damask Chamber which had earlier been the White Room; the Crimson Marine Chamber earlier the Walnut Tree Room; and the Wrought Work Chamber, earlier the Red Room. They all had 4-posters with goose feather mattresses, bolsters and pillows.

The main reception rooms were the Great Parlour, the small Drawing Room, the Dining Room which sat 12 at table, the Large Gallery which might have been the Music Room as there is mention of a spinet, and they played backgammon and draughts in the Little Parlour. In his Study, Daniel Baker had kept an extensive library of over 400 books ranging from religion and philosophy to astronomy (he had 4 telescopes) and gardening and the care of horses. A book called ‘The History of Highwaymen’, is a reminder of the dangers of travel and the many firearms kept in the house included travelling guns, blunderbusses and horseman’s pistols. He was a J.P. and there was a Justices Room where he would have dealt with the cases brought to him at the house, as was then the custom.

Evidence of the constant fear of fire is that there were 24 more buckets kept in the Great Hall which was later big enough to hold 60 French boys and a large assembly of nobility and gentry. There were 15 separate fire places. The Kitchen and Bakehouse were well equipped with Pewter the Best, Pewter the Worst, jacks and wheels, cranes, hooks and spit racks plus great boiling pots to cope with cooking for such a large family on an open fire. The gate bell rang in the Lower Brick Hall where 10 heraldic shields hung. The use of the particular description ‘brick’ suggests that much of the rest of the house was not, but was instead timber-framed with wattle and daub. The precautions against fire would seem to support this view.

Outside there was the Coach House where they kept the post chariot and a coach. The coachman lived above the stables. The Brew House was where the small beer and strong beer was brewed to supplement Daniel Baker’s extensive cellar. There was a ½ acre garden surrounded by a very high brick wall where they grew grapes. There is also mention of an Orchard, a ‘Necessary House’ built of lath and plaster, a large dog kennel, a summer house, a sundial and cucumber frames. The gardener’s equipment included tufting, docking and setting irons and three stone rollers. There was a water engine and a water cart.