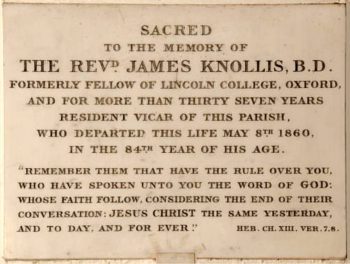 James Knollis was from Burford in Oxfordshire. He had an Oxford MA and BD, and was a Fellow of Lincoln College from 1795-1815. Besides being resident Vicar of Penn from 1823, he was also perpetual curate of Maidenhead from 1819 until his death. He straightaway built the Old Vicarage for the very considerable sum of £1,400, at his own expense, in 1825, noting that it had ‘Ground floor, 4 rooms, 2 kitchens, 2 pantries; on first floor, 6 bed chambers, 2 dressing rooms and a water closet.’
He also noted that the churchyard had been fenced-in with rails at the charge of the parishioners. 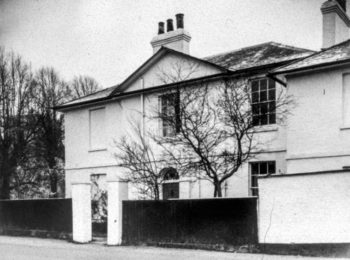 The excitement of two visits by King William and Queen Adelaide, in 1833 and 1835, is recorded in two long letters from his wife, Frances. In her first letter, she records that they received the King and Queen at the Old Vicarage with Earl Howe and his wife. They remained only a short time in the Drawing Room and were then accompanied to the Church for the christening of Adelaide Ida, the Howe’s eldest daughter. After a visit to The Knoll, to admire the view towards Windsor, The King and Queen and Mr Knollis were later entertained to dinner at Penn House.

In 1845, Knollis had to surrender his Penn Street parishioners to Earl Howe’s desire for a new church there, and so when, in 1852, Philip Rose was looking for more parishioners to justify his proposal to build St Margaret’s Church, James Knollis was not in the least inclined to see the process repeated and understandably dug in his toes at the prospect of ceding any more of Penn parish, despite pressure from Earl Howe. Eventually, the beleaguered Mr Knollis offered up only “the 51 households on the Hill” i.e. from Potters Cross up Dog Hill. The final boundaries were not agreed until after his death.

Casimir de Genouillac, who was one of the boys at the French School in Penn, left the school in 1808, aged 17, with only 12 guineas to see him on his way, and eked out a living as a teacher in small schools around Penn. He had to endure the widespread, indiscriminating and sometimes violent hatred of all things French and Catholic. “No Jews, no wooden shoes, no Popery” was a popular cry of the day. He was also permanently in debt and at times despaired for his future, but eventually found a more agreeable post, at a small school near Newbury, under the Rev. James Knollis who became a good friend, long before he was to become Vicar of Penn.

In 1814, Napoleon was exiled to Elba and Casimir was at last able to return to France. Not long after his return, James Knollis wrote to Casimir to report that ‘As to the peace, there were great rejoicings everywhere and there was plum pudding at Newbury drawn by oxen and boiled by steam, 28 feet long.’ He wrote again the following year after Waterloo, ‘Let us now pray that the two finest nations in the world may not be permitted to ruin first each other, and ultimately themselves.’ Truly glad will I be to see you – and whenever you like to come over and can do so – let this be your invitation!‘

His widow Frances Knollis, lived in The Knoll behind the church, for 20 years after he died.