In my last article I promised a translation of the Latin inscription of the very fine marble monument on the north wall near the back of the nave which commemorates Daniel and Barbara Baker:

This monument both to herself and to her meritorious husband Daniel Baker (whose family’s ancient roots originate in the county of Kent) was placed here at the instruction of [his wife] Martha of the Mellish family, from Bligh in the county of Nottingham.


After 41 years lived generously and honourably in this parish with his most gentle spouse he departed this life in the year 1727.


His wife, being a fine and visible exemplar of piety towards God and of love towards her family, survived until the year 1753.
In the course of a happy marriage she was delivered of nine sons and eight daughters four of whom were snatched from her at a
tender age; the rest attaining long life of no less distinction than that of their parents.


By one of those unpredictable turns of fortune that characterise human affairs [it fell to] the only surviving male heir and scion of that numerous issue John Baker Holroyd of Sheffield Place in the County of Sussex to fulfil the instructions of his grandmother by erecting this monument in the year 1770. 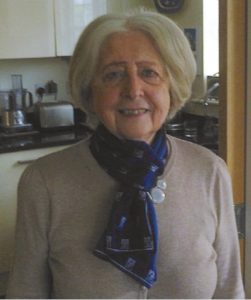 This translation was worked on both by Earl Howe and by my good friend, Jean Rollason, who died suddenly last month. She had read Latin and Greek at London University, taught them at Wycombe Abbey, and so was well-qualified and always willing to contribute precision and polish to my always erroneous drafts. She also took part in several historical presentations in the church, most recently in the one on William Penn the Quaker for the Octocentenary. After a moving funeral service she was laid to rest with her husband in the graveyard. She is a great loss.