A memorandum in the Parish Register by John Bennet records that on 8 July 1709 ‘the Arms of Queen Anne were hung up’. They were painted on canvas mounted in a blue and gilt wooden frame, 7ft x 5ft 6 ins. They are a fine example of Stuart Arms and remain in excellent condition on the north wall of the nave. When first painted, they probably hung above the chancel arch over the Doom, which was still hidden under whitewash and lath and plaster.

The Arms of Elizabeth I and her predecessors for over two centuries had reflected their claim to the thrones of both England (three lions) and France (three fleur-de-lis). When James VI of Scotland succeeded Elizabeth I as James I of England in 1603, he added the Arms of the then separate kingdoms of Scotland (a lion rampant) and Ireland (a harp). The Arms were supported by the Lion of England and the Unicorn badge of the Stuarts. The initials A R (Anna Regina). confirm that our Arms were put up in Queen Anne’s reign (1702-14) and they must have been painted or commissioned before the Arms were changed in 1707 after the Act of Union with Scotland. The motto ‘semper eadem’ (always the same) was used by both Elizabeth and Anne. 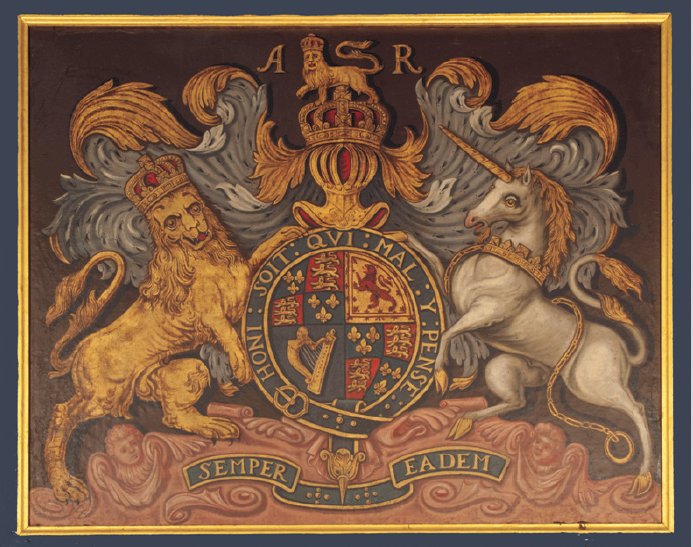 They are very unlikely to have been the first Royal Arms to have been  hung in the church. Their display was not made compulsory until Charles II’s restoration in 1660, when Samuel Pepys records ‘how the King’s Arms are every day set up in the houses and churches’, but there is plenty of evidence, from Henry VIII’s reformation onwards, that parish churches were actively encouraged to put them up. Even during Catholic Mary’s short reign they were to be set up in a less prominent place, and it was only during Cromwell’s Commonwealth that they were abolished to be replaced by State Arms. A survey of Bucks churches in 1637, makes frequent mention of the absence or faulty position of the Royal Arms, but there is no mention of them in the long and very critical report on Penn Church, which suggests that in this respect at least, all was well.

When the Arms were changed, the previous ones were sometimes adapted as an economy. Penn’s failure to amend the Arms to reflect the accession of George I, Elector of Hanover, in 1714, is probably because both Patron and Vicar were strong High Church Tories and greatly resented the new King. The Vicar reportedly refused to pray for King George and took the compulsory oath of fidelity to him only with great reluctance. The claim to be King of France was only dropped in 1801, at which point the fleur-de-lis were removed. Victorian church restoration removed many examples and today only a quarter of Bucks churches still have them.

There is a local tradition that Queen Anne used to visit The Knoll, the large house south of the church and sit in the belvedere on the third floor watching her children play on the lawn at Windsor. This is a fantasy, presumably based on the presence of the Royal Arms in the church.