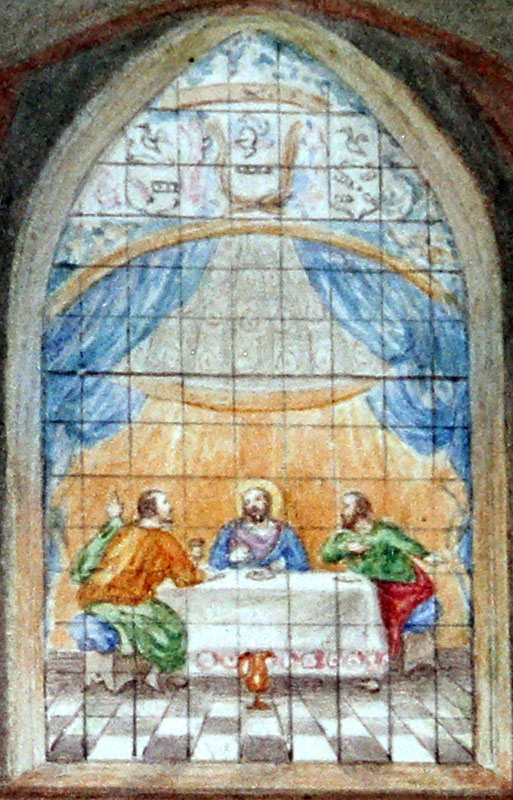 The East window of our church has been changed several times over the centuries to accord with changing fashions. We don’t know what it was like in the pre-Reformation Roman Catholic era, but all churches were required to remove any such evidence of Popery and the windows are plain glass in the earliest surviving view, a late 17th-century drawing.  In 1736, the new Proprietor, Sir Nathaniel Curzon, the 4th baronet who had been brought up in Penn, and was the second son of Sarah Penn, commissioned a ‘painted’ window picturing ‘Christ Making Himself Known to his Disciples at Emmaus’ (Luke 24:30). We see it, set in a brick wall, in the photograph of Henry Zeigler’s water colour of c.1860 which hangs in the church.  The top of the window contains three coats of arms.  On the right: the Curzon arms, centre: the Penn arms, and on the left: the Penn and Curzon arms combined. The window was made by John Rowell, of ‘High Wickham’, and was probably his last piece of work before moving from Wycombe to Reading. 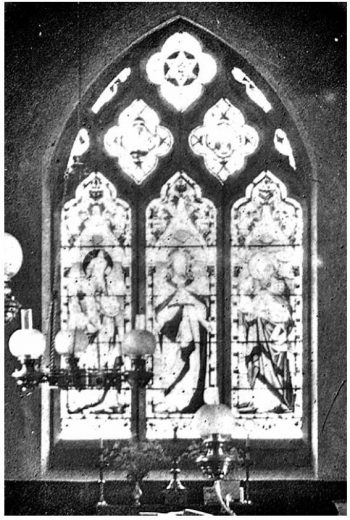 Soon after Henry Zeigler’s water colour was painted, in 1865, perhaps encouraged by a new Vicar, and as part of considerable changes to the church, Earl Howe paid for an expensive and imposing new window in the traditionally Gothic tradition advocated at the time by the Victorian Oxford Movement. The window depicted Jesus’ Transfiguration, and had Jesus in the centre with Moses on his right and the prophet Elijah on his left. It was set in a rebuilt chancel east wall of Bath stone and black knapped flint.

Then, in 1931, the Vicar, of High Church persuasion, was intent on restoring the more Catholic tradition of an altar curtained at the back and sides by a dorsal and riddell posts. However, the curtain covered the bottom foot or more of the Victorian East window. The Vicar therefore commissioned the present window with coloured green glass at the bottom to go behind the curtain.
The green glass incorporates a notice

“This window was drawn (and donated) by Margaret and Hugh Pawle at A.K.Nicholson’s Studio’s 105 Gower Street WC1. In the event of the dorsal ever being removed please apply to the above for the complete design”. The curtain was duly removed in 2003, but by then, the designer’s workshop had long since closed. The window is dedicated to Hugh Pawle’s mother and sister, who lived at Hutchins Barn, Knotty Green.

So what happened to the Victorian window? Many years ago I was assured by Pat Cuthbert and more recently by Herbert Druce, that they remembered the stained glass had been given to Penn Street Church. I tried to find evidence of this, but all the Penn Street windows were firmly assigned to the same 1849 date when the church was consecrated. I could find nothing in local or Diocesan records, or the Bucks Free Press. 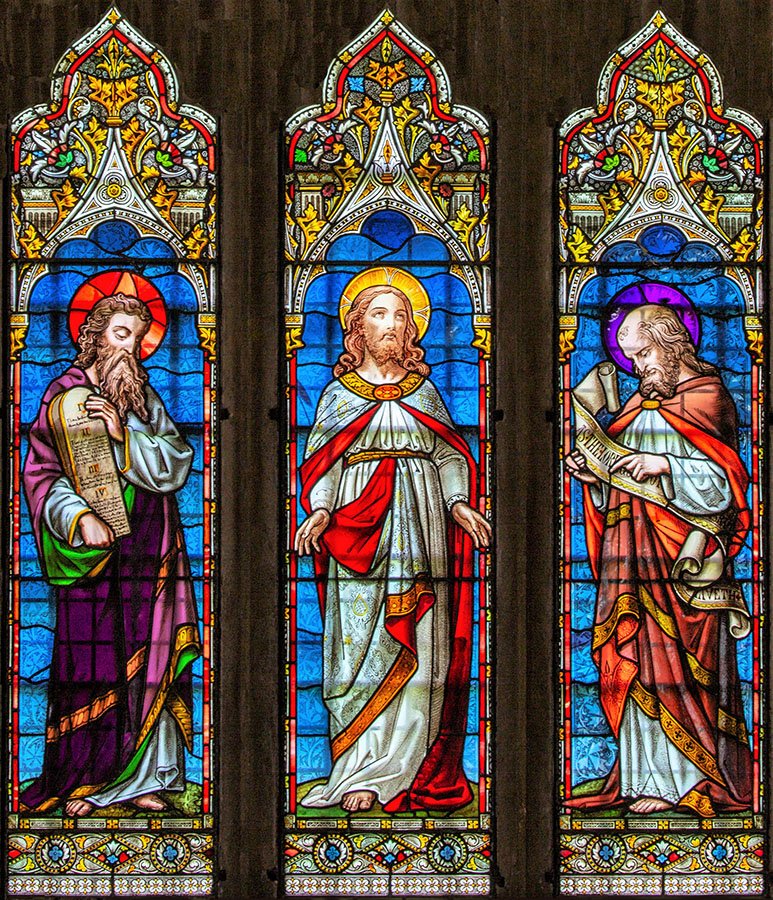 The solution to the mystery came from Michael Hardy, who was photographing the Penn Street windows and read a 1988 NADFAS report which noted that in the North transept the stained glass was not tall enough for the window height and the gap above had been filled in with opaque pale yellow mottled glass. He checked the design and size against the only surviving shadowy old photograph of the 1865 Penn window and there was no doubt they are one and the same. Mystery solved!