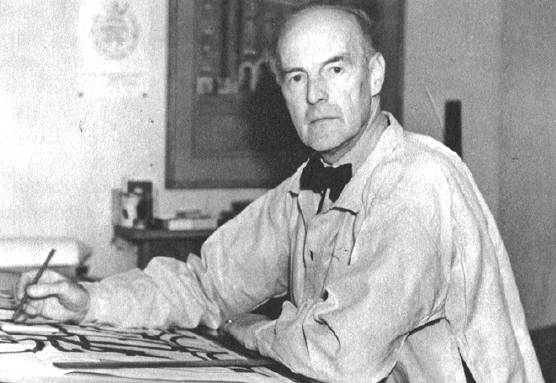 Sir Edward Maufe RA (1883-1974) is chiefly remembered today as the architect of Guildford Cathedral completed in 1962. However, he was responsible for designing sixteen new churches during his long career and in later life was also intimately linked with works carried out at the medieval Holy Trinity Church, Penn. Juliet Dunmur has just published Sir Edward Maufe, Architect and Cathedral Builder, a biography of Edward Maufe and his wife Prudence, which recounts their fascinating lives.  (ISBN 978-1-905597-92-5.
Available from the author – j.dunmur@gmail.com for £20.00)

Prudence Maufe worked with Sir Ambrose Heal as an advisor on interior design from 1915 onwards. Edward Maufe designed an extension to Ambrose’s home in Knotty Green in 1925 and ten years later was responsible for rebuilding Heal’s retail premises in Tottenham Court Road, London. It is assumed therefore that it was through this link with a parishioner that the Rev. Oscar Muspratt was able to engage Sir Edward to advise on various projects at Penn.

Not long after he joined the parish, Rev. Muspratt wrote in April 1946, “At a recent meeting of the PCC, I asked for a long-term policy to be formulated in regard to the care and restoration of the Church and its interior furnishings. Since then we have been fortunate enough to secure the assistance of Mr Edward Maufe ARA one of the leading church architects in the country. Among other matters we have asked him to advise us on a suitable memorial to those who gave their lives in the war.” The war memorial took some time as Edward was busy working on the War Memorial for St Paul’s Cathedral which understandably took priority. But in the meantime a complete set of drawings of Penn Church were prepared by J.W. Broadbent, a lecturer at the RIBA College and local resident, with four of his students, as a starting point for Edward to prepare his proposals for improvement and restoration that would be spread over a number of years.

One of Rev. Muspratt’s first priorities was replacing the old organ. This meant moving the pulpit across from the north side to the south side of the nave in order to provide space for the new organ console. The site of the organ itself in the south aisle was a reluctant compromise “mainly because Mr Maufe did not wish to consider amending the present arrangements at the West End.” (PCC report for 1947). Incidentally, the organ, which was partly second-hand, was purchased on advice from Dr Lloyd Webber, father of Andrew Lloyd Webber and organist at All Saints, Margaret Street. He played it at the service of dedication in January 1948. 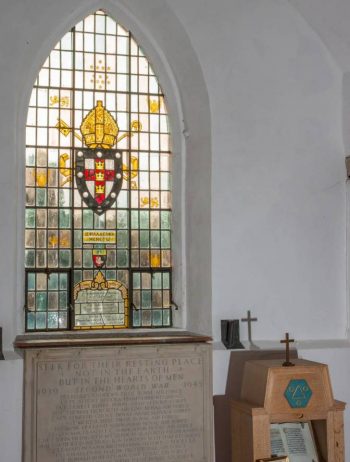 The ‘Pennsylvania’ window
with the WW2 memorial below it,
and the Book of Remembrance cabinet
designed by Sir Ambrose Heal. .

By June 1948 the war memorial, designed by Edward Maufe and carved by Darsie Rawlins, was installed and again Dr. Lloyd Webber was at the organ for the service of dedication. In August that year the church received the visit of the Bishop of Pennsylvania and part of the service was broadcast via the BBC to North America. As the window above the war memorial was “in an advanced state of dilapidation”, the following year it was decided that it should be replaced and “Mr Maufe suggested we could well commemorate the various historical links between the parish of Penn and the diocese of Pennsylvania. Accordingly Mr Pawle [the stained glass window designer] in collaboration with Mr Maufe has devised a strikingly dignified design.” (PCC Newsletter October 1949) that commemorated the visit of the Right Reverend Oliver J. Hart.

In 1950 Edward Maufe designed the new belfry screen that was made and installed by William Lacey of Hounslow. By 1951 it was found that the chancel and south transept roofs were in very poor condition and so Edward advised a full survey be carried out by J.E.M. Macgregor of the Society for the Protection of Ancient Buildings. As well as the roof work it was found that the South Porch roof had dry rot. During this round of restoration, four windows were found where none were suspected and the decorators “stumbled across the three consecration crosses” (PCC Newsletter April 1952).