It is a full year since my last article about the arrival in Penn of the Revd John Grainger, and the many changes which he made  to  the  interior  of  the  church,  inspired  by  the  Oxford  Movement with its advocacy of a higher degree of ceremony in  worship  to  bring  it  nearer  to  that  of  the  Roman  Catholic  Church. This also required ‘improvements’ to the fabric  of the church, which in effect meant the removal of any feature which was not in accord with the ideal of the architecture of the medieval Decorated period (c.1280-1380).

Thus,  as  I  noted  before,  two  galleries  were  removed,  a  two-storey  south  porch  was  taken  down  and  the  three-decker  pulpit  was  removed.  In  addition,    an  altar,  carrying  a  cross  and  candlesticks,  was  restored  after  more  than  three centuries,  although the altar was of wood rather than stone  as  it  would  have  been  before  the  Reformation.
The  eagle  lectern,  another  reversion  to  medieval  tradition,  may  have been installed around this time and the black and red Victorian tiles laid on all the floors.  The natural colour of the  oak  of  the  roof  timbers  still  survives  in  the  tower,  but  elsewhere they were stained black, probably at this stage.  The very fine, early 18th century pulpit, oak with marquetry, arrived  from  the  Curzon  chapel  in  Mayfair  when  it  was  closed in 1899.

The photograph is of a water-colour of the exterior of Penn Church by Henry Zeigler (1793-1874). He was a leading painter in his day and taught Queen Adelaide,  the wife of William IV, to whom the 1st Earl Howe was  Lord Chamberlain. The painting shows the church as it was in c.1860, just before the first significant changes were made to it since the 1730s, and  was  presumably  commissioned  for  that  reason.  The  east window was still the ‘Road to Emmaus’, installed in the 1730s and set in a brick wall.  Both were soon to be taken down and replaced with a more suitably Gothic window set in the knapped black flint fashionable at the time. 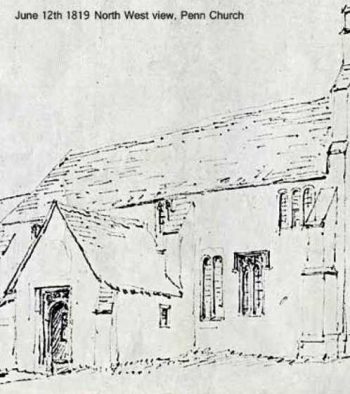 The two lancet windows in the north wall were presumably regarded  as  too  early  and  too  primitive,  and  so  the  single  lancet  was  blocked  in  (to  be  rediscovered  in  1952)  and the double lancet was replaced by a copy of the late 15th century clerestory (higher level) window on the other side of the porch. The three-light brick window in the clerestory the other side of the porch was rebuilt as a copy of the other two original 15th century clerestory windows and the lower brick window was filled in. All these changes were aimed at  producing    a  symmetrical  all-Gothic  appearance  to  the  church as you approach from the main road.

On  the  far  side  of  the  church,  Two  semi-dormer  windows  were  put  in  the  south  isle,  presumably  replacing  either  worn  out  original  14th  century  windows  or  unacceptable  later replacements.

The  first  Earl  Howe  paid  for  this  work  and  one  wonders whether his money was well spent. Fortunately, our mainly 14th-century aisle and tower were seen as correct, so what happened in Penn was only a modest example of Victorian restoration,    when    well-intentioned,  but    over-zealous    concerns to sweep away the past often carried away much of value that contributed to the atmosphere of the church.  In other local churches, such as Beaconsfield and Amersham, very little is visible of  the former medieval church.