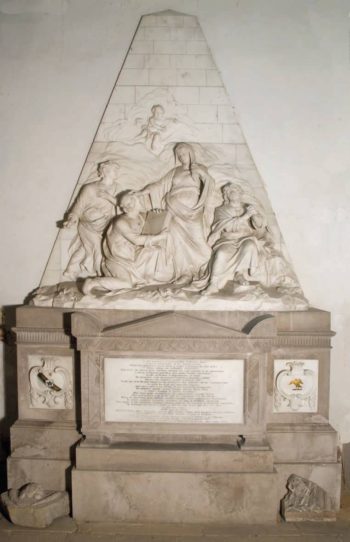 There is an impressive monument on the east wall of the north transept of Kedleston  Church on the Curzon estate in Derbyshire, erected, according to the inscription, in 1762, by his wife Mary, to a design by Robert Adam. He was the second son of the 2nd Baronet and Sarah Penn and was born in Penn and went to school at Berkhamsted. He unexpectedly inherited the baronetcy in 1727 when his elder brother was thrown from his horse whilst hunting. He also inherited the Penn Manor and proprietorship of Penn Church when his uncle, Roger Penn, died in 1731.

The figures of Sir Nathaniel, his wife and their two sons were carved by John Michael Rysbrack. The inscription records that Sir Nathaniel practiced as a Common lawyer until he was 40 and was also an MP for 30 years. He had three sons, John who died as an infant and is shown on the monument as an angel, Nathaniel, who inherited Kedleston and became Baron Scarsdale, and Assheton, who inherited the Penn estate, and was eventually to become Viscount Curzon.

The deceased is described in flattering terms as might be expected, but a very fond grandfather comes through with the words ‘The Sight of his Children’s Children having fill’d up the measure of all Earthly enjoyments…’. One of the boys is shown holding a book which has the inscription ‘The Holy Bible. The best legacy I can give you for therein are contain’d the Words of Eternal Life’. His wife Mary is described as the daughter of Sir Raphe Assheton Bart of Middleton in Lancashire.

John Michael Rysbrack (1694-1770) came to London from Antwerp in 1720 and soon became the unchallenged head of his profession until challenged by Peter Scheemakers. The Dictionary of British Sculptors records this Kedleston commission as his last monument before he retired. 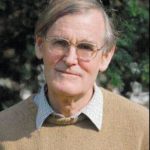 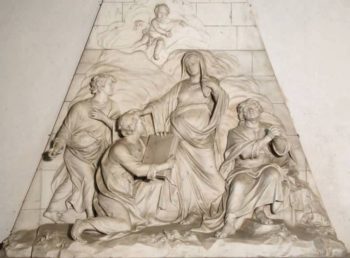