We have already noted that In 1845, the Revd James Knollis had to surrender parishioners to allow Earl Howe’s desire for a new church at Penn Street, and again, in 1852, when Philip Rose was looking for more Penn parishioners to justify his proposal to build St Margaret’s Church. The reason for all this church-building was a widespread view that the Anglican church was in a bad way. Churches were often in a poor state of repair and held staid Prayer Book services, with few hymns, long theological sermons and seating arrangements with pew rents which reflected a rigid social pecking order. 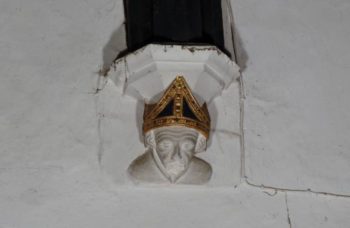 One of the corbels supporting the nave roof in Penn Church, dating from c.1400. It is a medieval Bishop thought to be St Hugh of Lincoln. Photograph by Eddie Morton. St Hugh was Bishop 1186­1200. A French nobleman, he was an exemplary bishop and is the Patron Saint of the sick, shoemakers, and swans.

The second Sir Philip Rose, recalling his boyhood in the 1840s, remembered Penn Church, “It was a dreary old Church in those days with richly cobwebbed windows in the corners of which huge spiders lurked and a Service as dreary as the Church, the spiders being much more interesting than the sermons:’ He also remembered the church in London to which they used to go. ” Twice every Sunday to Church ….. And woe betide any servant who did not put in an appearance …. .It was bad for any of us who did not remember the text of the long sermon when we got home. No music, toys or games were allowed on Sunday, and cards were looked upon as the ‘devil’s plaything’, and were under no circumstances to be allowed in the house.”

Sir George Grove, Editor of the Dictionary of Music and Musicians, and the first director of the Royal College of Music from its foundation in 1883, whose father came from Penn, remembered the Church of England in 1830 as having been, “a mass of deadness and stiff dullness. The old Wesleyan Evangelical movement had died down and the clergy were a body without a soul”.

Inspired by the Oxford Movement, the Anglican Church instituted radical reforms. The diocese of Lincoln, which had stretched unchanged from the Humber to the Thames, was split up and henceforth Penn was to come under the Bishop of Oxford. 106 churches were built in the new diocese of Oxford during the time of the first new Bishop, Samuel Wilberforce, between 1845 and 1869, including those at Tylers Green, Penn Street and Hazlemere. Churches all over the country were encouraged to restore the medieval arrangements of the Decorated period (c.1280-1380). A good deal of unnecessary damage was done to many old churches and Penn Church did not escape, as we shall see when the next Vicar arrives in 1860.

The stained glass window in the tower also depicts St Hugh and sits in the lancet window in the tower, of c.1325 in memory of a parishioner who died in 1946. Photograph by Michael G. Hardy from the ‘Stained Glass of Buckinghamshire Churches‘ website.