We have seen that it was probably David and Sybil Penne who rebuilt Penn House in 1536 and that in 1538 Sybil was appointed to the highly responsible and prestigious role of looking after the year-old prince who was to become Edward the Sixth. She was richly rewarded with land, churches and generous gifts which trebled the Penn family’s property and set their descendants on a course of good marriages and increasing prosperity for the next 350 years, right up to the start of the 20th-century when high taxes and profligate spending started to take its toll. 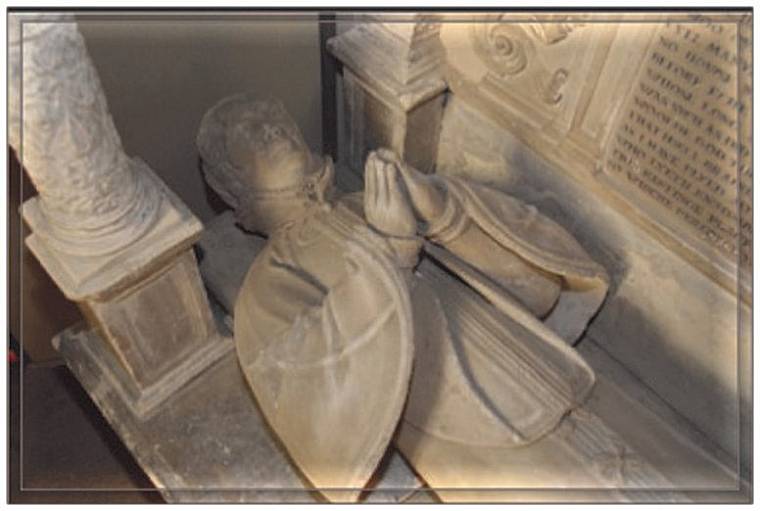 Sybil Penne, as we have seen, remained at Court all her life and died of smallpox at Hampton Court Palace on 6 November 1562. She was a Lady of the Queen’s Bedchamber and was probably nursing the young Queen Elizabeth, not yet 30, who had caught smallpox and very nearly died of the disease three weeks earlier. Indeed, at the point of crisis she was unconscious, her doctors thought she would die and her Council were in an adjoining room discussing the momentous question of the succession. The Queen herself believed she was dying and had made provision accordingly. It is intriguing to think that Sybil Penn’s care – she had known and looked after Elizabeth since childhood – might have played a significant part in England’s history, which would have been very different had Elizabeth died.

Sybil was buried in the chancel of Hampton Church and a fine monument was erected consisting of a recumbent life-sized effigy of her under a marble canopy supported on pillars. A rhyming epitaph extols her virtues including the lines, ‘Twoo queens that sceptre bare, gave credit to this dame…..Before eche joye, yea and her life, her Princes health prefard…’.

The church was struck by lightning and in 1829 it was pulled down and rebuilt. Sybil’s monument was moved to near the staircase leading to the organ loft and according to some contemporary reports, the tomb was irreverently disturbed and her remains scattered. 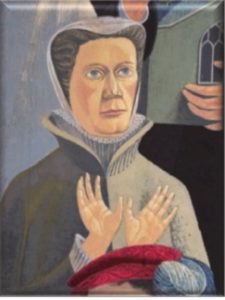 Sybil Penne as depicted on a wall
painting around a door at the rear
of Hampton Church.
Her monument effigy appears
to have been used as a model.

Immediately afterwards, so the story goes, strange noises as of a woman working at a spinning wheel, and muttering the while, were heard through the wall of a room in Hampton Court Palace. A hidden chamber was discovered in which there was an antique spinningwheel and the old oak floor boards were worn away where the treadle struck them. In the 1880s there were frequent accounts of seeing ‘Mrs Penn’s tall gaunt form’ around the haunted room and gallery, exactly corresponding with the appearance of the effigy on the tomb, and of the low whirring of an unseen spinning-wheel, a sepulchral voice and a stealthy tread. There was also another, surprisingly well-authenticated sighting in 1905.

There are monumental brasses to four of the five generations of the Penne family of the Tudor and Stuart periods, and the only one missing is to David and Sybil Penne. David died on 3 February 1565, just over two years after his wife, and his will directed that his body was to be buried in Penn chancel, ‘among myne ancestors’. He also directed that the body of his wife should be removed from the place where she was then buried and be placed beside his body. An alternative account of when Sybil’s tomb was moved in 1829 was that ‘only a little yellow hair and a few hair-pins’ were found in the grave, suggesting that her body had been previously removed. However, there is no record that this was ever done and it may be that her absence is why no brass was ever prepared – unless of course it was lost or damaged when the family brasses were all moved to the south aisle.