The rebuilding of the chancel by the fourth Sir Nathaniel Curzon, the second son of Sarah Penn, described in the previous article, was only a part of radical and costly alterations to the structure of the church which he knew so well from his boyhood in Penn.

In 1733, the nave roof was raised again, by another three feet, and extended out over the south aisle. The arch between the nave and the chancel was widened, replacing the medieval lancet with the present round-headed chancel arch, and three towering gentry pews blocking the chancel were moved into the south aisle. This was a period when the sermon was all-important. A good view of the preacher was essential and because high box pews were the fashion for gentry families, the preacher had to be placed on the highest level of a three-decker pulpit in order to be visible. The Bible was read from the middle level and the Clerk led the responses for a largely illiterate congregation from the bottom level. Henry Ziegler’s watercolours of c.1850 showed us what it looked like. 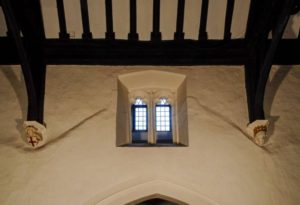 There is still visible evidence on the wall of the nave of the gable roof of a 2-storey medieval porch at the centre of the south aisle which must have remained because there was still enough head room to retain the ‘Little Gallery over against the South door…. being built at the charges of the young men that had learned to sing Psalms’ in 1709.

The present single-storey south porch and vestry were added. In October 1733, the congregation paid for a second wooden gallery over the west door to the tower, to cater for an increasing population. It has since been replaced by the organ.

The newly extended roof over the south aisle had the big disadvantage of blocking the three high- level, southern clerestory windows of the nave, which left the nave in need of more light, particularly near the new public gallery. An 1819 drawing in the British Museum confirms that a larger three-light round-headed window replaced the original smaller 15th century window of which the displaced white clunch stones are still to be seen in the wall. The drawing also shows that the long two-light brick round-headed window, which is still there, was added at a lower level.

The fine medieval tie beams and arch braces of the roof, resting on their stone corbels, were left in place and the heightened roof of the nave allowed the whitewashed Doom, by losing only a few inches of its periphery, to be moved up to its present position in the roof space above the tie beam over the chancel arch. They must have known it was worth keeping.

The Lady Chapel was taken down to window-sill level and rebuilt in brick on the medieval base. There were probably lancet arches between the Lady Chapel and the chancel and the south aisle which were removed at this stage.