John Penne, who, as we have seen in an earlier article (Monuments No.6), lived in Amersham, was succeeded as lord of the manor by his son David, who was probably born around 1500 since he himself had a son, John, in 1534. The parish registers do not survive from before 1559, but anyway David would have been brought up in Amersham. Penn House was rebuilt, in 1536 if the plaque on the front is to be believed, probably by David and his wife Sybil (written variously as Sibille and Sibell) Hampden early on in their marriage, although the arms on the second small stone plaque below the first are those of Sarah Shallcross, a 17th-century Penne wife. 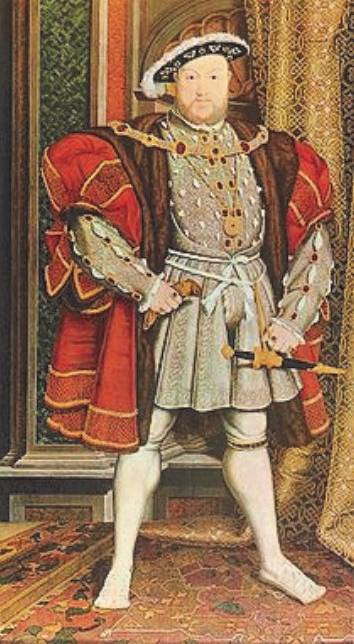 Sybil was a Hampden on both sides. They were a wealthy family, well-connected at Court, and it was a family relation, Sir William Sydney, Chamberlain and Steward of the infant Prince’s household, who recommended her to the then all-powerful Thomas Cromwell. In 1538, she was appointed ‘dry norrice’ to the one year-old Prince Edward whose mother, Jane Seymour, had died a few days after his birth. It must have been a daunting task. She was young, probably still in her 20s with five young children of her own and looking after Henry VIII’s son and heir was an immensely important and probably risky undertaking. According to Sir William’s son, who was brought up with the prince, she was his ‘only nurse’ and slept with the young prince every night for the first five years ‘so long as he remained in women’s government’.

The frequent marks of royal favour and exchanges of gifts over the ensuing years show that she was highly esteemed by Henry VIII and his successors. She remained at Court all her life serving Mary as a Woman of the Queen’s Privy Chamber and Elizabeth as a Lady of the Bedchamber. The royal nursery moved between Havering, Hampton and Ashridge near Berkhamsted, and since her own children were contemporaries with the King’s (John was a year younger than Elizabeth) they may well have played together. As we have already seen (Monuments No 5), Elizabeth I was to appoint John Penne to a lucrative role as her Escheator and largely ignore his family’s recusancy. In 1561, she gave a generous ‘New Yeres gift’ of £18 sterling to the ‘sometyme nource to our dere and well beloved brother King Edward the Sixt’. 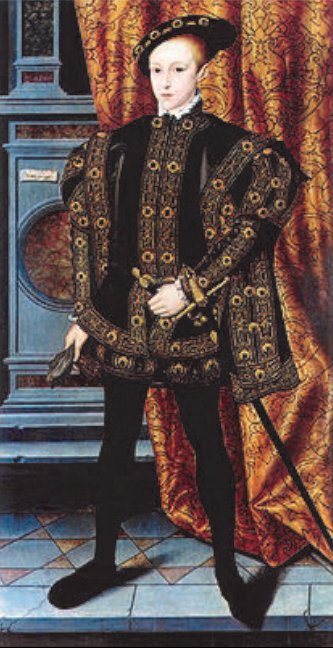 The last portrait of Edward VI before he died
of TB aged 15. he is gallantly imitating his
father’s stance in the Holbein portrait (NPG)

In 1539, ‘David Penne and Sibille, his wife’ were granted an annuity of £40 during her lifetime ‘in consideration of her services as nurse to Prince Edward, the heir apparent’. Later the same year, shortly after the dissolution of Missenden Abbey (which her own family had helped establish in the 12th-century), she wrote to Cromwell asking for its lease from the King, but was not successful Two years later, ‘in consideration of her services in the nurture and education of Prince Edward’, and apparently after she had successfully nursed Edward through a fever, Henry VIII granted her for life all the rights and interests in Penn that had formerly been enjoyed by Chacombe Priory. This was the rectory (probably centred on Parsonage Farm) which was farmed out at the time to Richard Balam and included two cottages (possibly Crown and Church Cottages near the church). Altogether it was worth £8-13-4d p.a., representing over 300 acres, together with the patronage of Penn Church.

The grant stipulated that after Sybil’s death a yearly rent of £2-10-8d, representing 1/40th part of a knight’s fee, would have to be paid to the King, but in 1553, just two months before his early death, Edward VI confirmed these grants to her and her heirs in freehold. They almost trebled the Penn family land-holding in the parish and its immediate area, and 456 years later, Earl Howe, her direct descendant, is still patron of both Penn and Little Missenden churches and owns a good deal of the same property.

Despite their significance in the history of both the family and the parish, there is no surviving monument to either David or Sybil Penne in Penn Church and the next article will suggest why this is and retell a good ghost story.