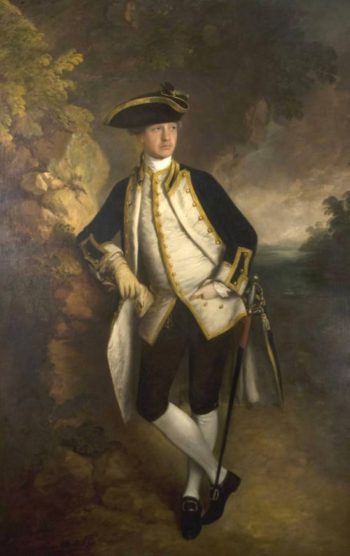 The future Admiral Howe, in 1763,
by Thomas Gainsborough 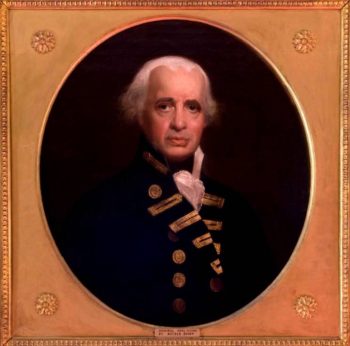 Admiral Earl Howe, 1795, wearing an admiral’s
undress uniform and his own white hair.
The painter was Mather Brown.

It was Assheton Curzon’s son, Penn Assheton Curzon, who brought in the Howe connection by marrying the eldest daughter of the then First Lord of the Admiralty, later Admiral of the Fleet, Richard Viscount Howe. His name appears on at least three of the memorials in the chancel although there is no memorial to him in Penn Church. Indeed, no record of a visit has been seen, but his son-in-law, Penn Assheton Curzon, was buried in the vault under the chancel which was dug for him in 1797. Admiral Howe was still alive and active so there would seem to be a high probability that he was here for the burial of his daughter’s husband.

He had joined the Royal Navy as a Midshipman at the age of 13, as was customary at the time, and his promotion was very rapid, decisively aided by wealth and royal connections (his grandmother was the Countess of Darlington, George I’s illegitimate half-sister), as well as considerable ability. He was a Master and Commander with his own ship at 19, a Post-Captain at 20 and saw distinguished service in four wars. For a brief period he had been Flag Captain to the Prince of Wales’ second son, Prince Edward, Duke of York, a Rear Admiral, a sign of royal approbation. It is not surprising to find that his biographer described him as headstrong, and obsessed with rank, position and his own self-importance. On the other hand he had vast prestige with his sailors who nicknamed him ‘Black Dick, the sailor’s friend’.

Admiral Howe was appointed commander-in-chief in North America in 1776 and received a commission, jointly with his younger brother, General Sir William Howe, who was already there in command of the army,. They were ‘to treat with the revolted Americans, and to take measures for the restoration of peace with the colonies’. Admiral Howe had often talked to Benjamin Franklin about the colonists’ grievances, and was sent as a conciliator, but arrived after the declaration of independence on 4 July 1776. He was too late.

He was particularly famous for leading the Channel Fleet of some 36 ships of the line to victory in a highly successful naval action 430 miles west of Ushant, against the French Revolutionary fleet on 1 June 1794, ‘The Glorious First of June’, celebrated for many years by the Royal Navy. The decisive point in the battle was a bloody encounter between the two flagships, the Queen Charlotte and the Montagne, which came within a few feet of each other exchanging lethal broadsides. The French were badly beaten with one ship sunk and six captured and he was a national hero. The King and Queen with three princesses went out to his flagship at Portsmouth and presented the Admiral with a diamond-hilted sword (valued at 3,000 guineas, an immense sum at that time), promising him the Order of the Garter.

His final contribution to the Navy which he had served so well for 57 years was successfully to negotiate with the mutineers at Spithead in 1797 and get them back to sea. They had genuine grievances, not least that their pay had not been increased since 1652. He had in fact retired some days earlier, but his reputation with ordinary seamen was so high that he was begged by the King to go to Portsmouth to see what could be done, and he spent several days being rowed about the Fleet speaking to the men. Both his courage and his taciturnity were proverbial. ‘I think we shall have the fight today’, one of his seamen is reported to have said on the morning of the First of June 1794, ‘Black Dick has been smiling’. He apparently often had a harsh and forbidding expression, but he was careful of the health and welfare of his men and they appreciated his ‘grim peculiarities’.

He had been created Earl Howe and Baron Howe of Langar in 1788 and when he died, the most famous Admiral in the country, he was buried at Langar in Nottinghamshire and a monument was placed in St Paul’s. His elder daughter, Sophia Charlotte, was allowed to inherited the barony, but he had no sons and so the earldom became extinct until it was it was renewed for his grandson in 1821, who then became the second ‘first Earl Howe’.