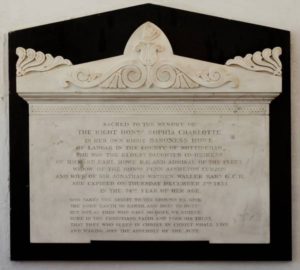 A previous article focussed on the large marble monument to Viscount Curzon (1730-1820) by Sir Francis Chantrey. This next monument to his daughter-in-law is also by Chantrey although much smaller. It was described by a contemporary as ‘chaste and elegant’.

Sophia Charlotte Howe was the eldest of three daughters of Admiral Earl Howe. He had no sons and she was allowed to inherit his earlier barony and so became Baroness Howe in her own right.   She married Viscount Curzon’s eldest son Penn Assheton Curzon in 1787 and there are two portraits of her in Penn House by J.W. Walker. 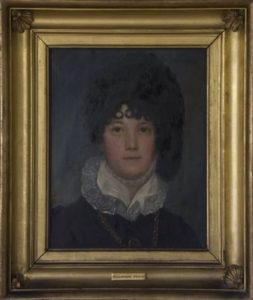 She had two sons and two daughters of whom three died early, aged 3 months, 16 and 29.   Only one son lived on into old age and he became Earl Howe. He was named Richard William Penn and she called him Penn.

A few years ago a small leather-covered notebook was given to me with Memorandums for my dear Penn scratched faintly on the cover. It had been kept by Baroness Howe between 1798 when her husband died, until 1813 when Penn, by then her only surviving son, left her guardianship.   She described it as ‘a kind of journal of every transaction of any moment in which I had been engaged’ on account of the properties of her two young sons.

There are several interesting references to properties in Penn, Penn Street and Holmer Green where she seems to have bought any significant properties which came on the market. Property was a good investment with inheritance tax at only 2½%. Those easily identifiable were:

French School – In 1801, £6,900 for the ‘large building now let to Government for a French School situated at Tylers’ Green in the Parish of Penn’ and she noted that ‘I bought it solely for the accommodation in future of my son.’

Pauls Hill – In 1808, £635 for several cottages etc at Penn Church. These must be the cottages in Pauls Hill.

Tylers Green – In 1809, £350 for four cottages & a Blacksmith’s shop at Tylers’ Green. This could be at French Meadow on Elm Road.

The last full entry is a poignant one, ‘Mr Steele signed the Deed in Chancery taking from me the care of both my dear Penn’s Person & his Property.’

She married again in 1812 to Jonathan Wathen Phipps, oculist to George III.  In 1814 he changed his name to Waller and inherited his maternal grand-father’s estates. He was knighted in 1832 and became Sir Jonathan Wathen Waller. The semi-circular stained glass window in the chancel comes from that marriage, and  may have come from their house or chapel.   The window commemorates the battle of Agincourt 1415, where the Duc d’Orleans was captured by Richard Waller. It includes small panels of 16th century Flemish glass and the Howe crest. 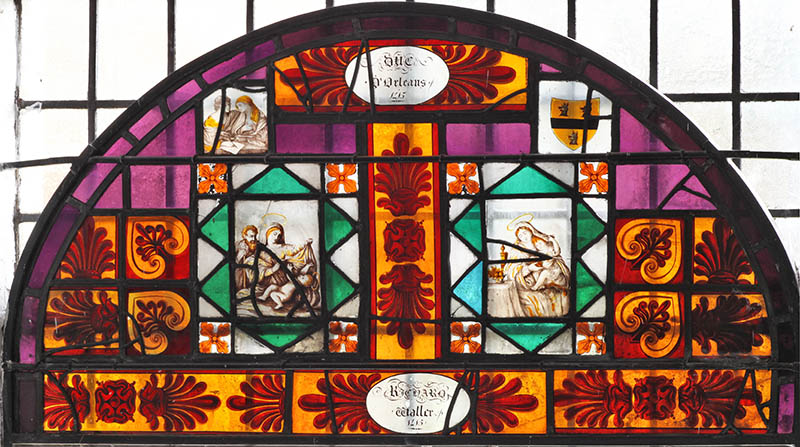 Baroness Sophia Charlotte Howe died in 1835 and is buried with Viscount Curzon at Penn.

“The remains of the late Baroness Howe, Lady of Sir Wathen Waller, will be removed for interment this day, from Pope’s Villa, Twickenham, to the family mausoleum at Penn, near Beaconsfield. Her ladyship’s demise was very sudden, as express was sent off to her son, Earl Howe, at Gopsal Hall, in Leicestershire, but three hours before he arrived the Baroness had breathed her last. Her Ladyship was in her 73rd year. Earl Howe and his three eldest sons remain at Penn House to attend the funeral.”