A member of the Jordans Quaker Meeting alerted Earl Howe to the following notice of a sale by a Cardiff auction house:

“An antique Charles II oak chest made to commemorate the marriage in 1671 of Sir Nathaniel Curzon of Kedleston in Derbyshire and Sarah Penn, daughter of William Penn, who founded the U.S. state of Pennsylvania, will be sold in a sale at leading South Wales auctioneers Rogers Jones Co. The sale is on Friday December 5”.

Making the chests was considered a privilege for the carpenter tasked with the commission and great pride went into their construction. Similarly, the more important – and rich – the couple, the more grandiose the chests became. The example to be sold at Rogers Jones is a tour de force of the wood carver’s skill. The chest is estimated conservatively at £700-1,000, but could sell for more.

The heavy oak carcase is embellished on all sides and its lid with romantic and religious symbolism. The profuse carving includes two pairs of confronting dragons and hearts, Christian crosses and anchors representing Faith, Hope and Charity on the pair of panels on the façade, while the lid is decorated with a trio of panelled rosettes. Among a number of inscriptions is one across the front, flanked by the date 1687, which reads ‘We Once Were Two – We Two Made One / We No More Two – Through Life Bee One’. Above and below the panelled rosettes in the lid is an inscription which reads: ‘Comfort One Another And My House Will Serve The Lord’.” 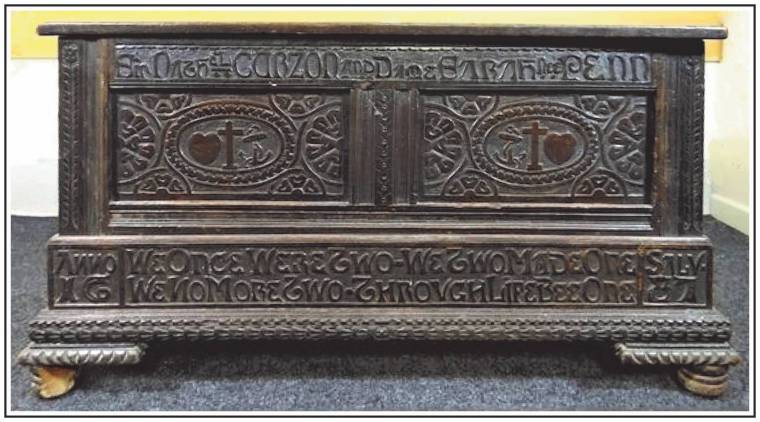 The advertisement for this lovely oak chest is seriously misleading. Sarah Penn was indeed the daughter of William Penn, but he was not William Penn, the Quaker, who founded Pennsylvania. Nor was it a marriage chest since it is dated 1687 and the couple were married sixteen years earlier in 1671. Sir Nathaniel Curzon, the 1st Baronet, died in 1686. At that time, his son Nathaniel and Sarah (neé Penn) were living in Penn and their five sons were at Berkhamsted School. It seems more probable that the chest was a farewell gift to the couple who had inherited a large estate at Kedleston and were leaving Penn.

Sarah was to inherit the Penn Estate and Earl Howe is her direct descendant. The chest is central to his family history and it was therefore very disappointing that his bid for up to £2,000 was not sufficient. This historical information was passed to the auctioneers before the sale, but one wonders whether the purchaser was aware that it had no connection whatsoever with the Quaker or with Pennsylvania.