John Bennet was born in Coventry, went to Oxford University and then straight from there to be an Usher at Berkhamsted School from 1682 until September 1700. He taught all the Curzon boys, who were then living at Penn, as well as Roger Penn, their cousin and heir to the Penn Estate. In September 1700, after the last Curzon boy, Charles, had finished his schooling, Roger Penn gave John Bennet the living of Penn and he was inducted by the Rev. John Theed, the Headmaster of Berkhamsted School.

The long attachment of the Curzons to Berkhamsted for many years after they had moved to Kedleston, was presumably because they thought very highly of their young teacher, who was only 11 years older than John, the eldest Curzon boy. These close ties explain why his is the only portrait of a Vicar of Penn hanging in Penn House. It was painted in 1707 when he was 44 years old. 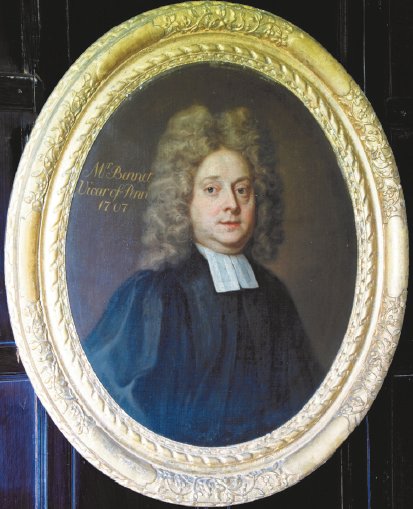 He was a very active Vicar indeed. He completed a brand-new vicarage; hung five new bells, of which three still survive today; put up a gallery over the south door ‘for a choir of young men who had learned to sing psalms’; hung Queen Anne’s arms over the chancel arch; and put up the unusual one-handed clock on the tower. In subsequent articles we shall look at these important additions to the  church in more detail.

He also completed the first really useful visitation returns which give us a most valuable glimpse of Penn at that time. There were only 480 souls in the parish in 109 families, with no schools, almshouse, or public meetings of any kind. There were four services of Holy Communion held during the year attended by only 50 or 60 people and the Vicar noted that ‘there were many at years of discretion who never communicate’, as well as many baptised who had not been confirmed. About 10% of the families were Dissenters (4 or 5 Quakers, 3 or 4 Anabaptists, 1 Presbyterian) and there were no Roman Catholics. This gives us a surprising view of Penn three centuries ago – only about 1 in 4 or 5 adults were fully-fledged Anglicans, and a considerable majority were not regular church-goers.