There is a fine wall monument, near the vestry door, to General William Haviland, an Irishman who lived in Penn for the last few years of his life. He was a close friend and relation by marriage of Edmund Burke, the most famous parliamentarian of his day, who had an estate at Gregories in Beaconsfield and also owned some land in Penn. General Haviland’s son Thomas, also an army officer, married Edmund Burke’s niece. 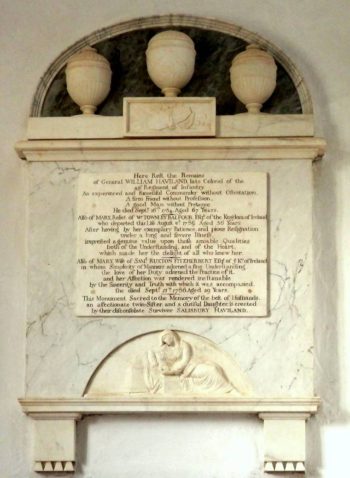 It was Burke who wrote the memorable epitaph on Haviland’s monument:
‘Here rest the remains of General William Haviland, late Colonel of the 45th Regt. of Infantry; an experienced and successful Commander without ostentation: a firm friend without profession: a good man without pretence. He died Sept.16th 1784, aged 67 years’.  The memorial was placed by General Haviland’s wife Salusbury  (N.B. not Salisbury as on the monument)

The monument was sculpted and signed by James Hickey (1751-95), who like Burke and Haviland was also an Irishman and a particular protégé of Burke’s. His name is inscribed on the monument as I+Hickey, which is also noteworthy for very visible corrections to no less than three of the inscribed dates. Hickey’s early death at the age of only 44 cut short a promising artist who had been appointed sculptor to the Prince of Wales in 1786 and who shortly before he died had been given the important commission, which he never executed, for a monument in Westminster Abbey to David Garrick the famous actor / manager.

Twenty years ago, I was in touch with the Regimental Office of the Royal Irish Rangers in the castle at Enniskillen. They were the successors to the Royal Iniskilling Fusiliers, who in turn were once the 27th Iniskilling Foot. William Haviland was appointed ensign at the age of 21 just as England declared war with Spain in 1739 and fought with the Regiment in all the many battles of his day against the rival Spanish and French Empires. He was later an aide-de-camp in the defence of Stirling Castle against Bonnie Prince Charlie in 1745. He commanded the regiment from 1752-60 and went on to Canada to take a leading Dart in the capture of Montreal by General Wolfe in 1759, commanding a brigade of 3,400 men. This settled Canada’s future as part or the British Empire. In 1767, he was appointed Colonel of the 45th Foot. During the American War of Independence he held a command as a Lt General for a short time. 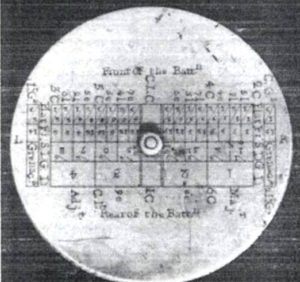 He was an inventive man with considerable mechanical genius and designed special pontoons to cross rapids and a sort of circular slide rule called the Haviland instrument which was used to work out the manpower required for various military tasks.

General Haviland lived in a large medieval mansion over-looking the Front Common at the lower end of Widmer Pond about 100 yards below the Red Lion. Edmund Burke later used the same house as the school for the sons of French émigré nobility (see Mansions & mud houses, pp. 34, 35). A contemporary recalled two huge fir trees close to the house, ‘the largest and most lofty firs in the kingdom … which may be distinctly seen from the terrace at Windsor, from Harrow-on-the-Hill, from St. Paul’s Church, and from the rising ground near Reading’.  General Haviland apparently called them his ‘two Grenadiers’.

He had a reputation for courage, ability and open-handed generosity and was apparently known and highly esteemed by George III. There is much about him in the PRO Kew, including his journal and correspondence, which would make a good subject for a future thesis.