A memorandum in the Parish Register by John Bennet records that, The little Gallery in Penn-Church over against the South door was finished March 5th 1703, being built at the charges of the young men that had learned to sing Psalms, it was painted at their charge July 8th 1709. 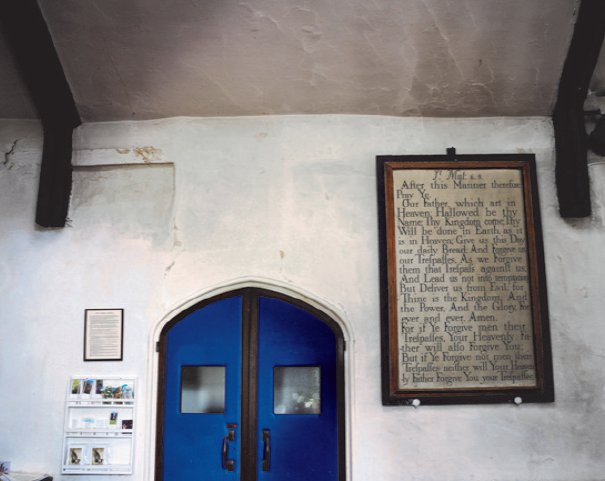 View of the South Door

The gallery is no longer there, but when we look above the south door we can see timbering and unevenness in the wall and plaster which shows where one of its supports was fixed to the wall. However, there is not nearly enough room for a man to stand up in the gallery so clearly the ceiling is now much lower than it once was. The question is settled by the marks of a cross-gabled roof high up in the centre of the south wall of the nave. This tells us that there was once a taller south porch running right across the aisle up to the main nave wall of the church and that it was easily high enough to allow head room for Mr Bennet’s gallery.

The Royal Commission for Historic Monuments completed an inspection of Penn Church exactly a century ago and reported that there appeared to have been a south porch of the 15th century. There would have been a still earlier porch, but by the 14th century it was common for porches to have an upper room which was used for many of the functions now carried out in the vestry. In other churches the upper room was used for the Sexton to sleep in or even as a school room. Presumably there would have been a door or arch through both of its side walls to allow a continuous south aisle and a high window in the south wall overlooking the graveyard to light the upper room.

The clerestory window above the central
arch showing the marks of the cross-gable.

Victorian ‘restorations’, inspired by the Oxford Movement, aimed to restore a church to a 13th/14th-century Gothic perfection and this included removing any galleries. Penn’s ‘restoration’ was carried out in c.1863 at the expense of the Earl Howe of the time. This is when the little gallery would have been removed. The high gabled roof and side walls of the medieval porch were also taken down and judging by the ‘modern’ smoothness of the plaster, caused a partial collapse of the central arch below the clerestory window. The present external south porch would have been constructed at that time.

Thomas Grove (born 1774), the father of Sir George Grove, remembered as a boy playing the hautboy (an older form of oboe often played with violin and bassoon) in Penn church, and was all his life a great singer of hymns. One can perhaps imagine him in the little gallery singing and playing his hautboy.