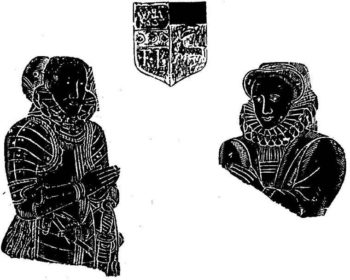 The earliest members of the Pen(ne) family recorded in the church are John and his wife Ursula Walleston and their six sons. They are commemorated on one of the five fine brasses in the south aisle. John’s will directed that he should be buried in the chancel and he was, but the brasses were all moved to the south aisle at some stage and then rearranged again in c.1953 when the Rev. Oscar Muspratt removed the pews and re-established a Lady Chapel.

The church remained essentially Catholic in appearance and ritual until John Penne was into his teens and he clearly remained Catholic in his sympathies because he and his wife were listed as absentees in 1584 at a time of compulsory church attendance and the following year his wife agreed to pay a fixed annual fine towards providing horses for the Queen’s service in return for exemption from penalties to which they were liable for their recusancy (i.e. their refusal to acknowledge the Queen as head of the Church).

It may well have been that they were protected from the more unpleasant consequences of their loyalty to the old religion by Elizabeth’s fond memories of John’s mother Sybil Penne, foster mother from 1538 onwards to Elizabeth’s young brother who became Edward VI. Sybil lived at court and as John was only a year younger than Elizabeth they may well have played together as children. Henry VIII, Edward VI and Elizabeth herself all gave Sybil Penn gifts, land and an annuity. She was still living at Hampton Court when she died of smallpox in 1561.

A few years ago, Earl Howe found amongst his family papers the original letters patent, complete with a large royal seal, appointing John Penn as Elizabeth’s Escheator for Bedfordshire and Buckinghamshire in 1574. The Escheator’s role was to ensure that the Crown received its dues when a royal tenant died, either without a successor or when the successor was underage, because in both cases the property reverted to the Crown. It may well have been a lucrative post because John was able to buy a good deal of property in Penn in the 1580s and 90s, including Baylins Manor, land in Forty Green, around Penbury Farm and from the Puttenhams of Puttenham Place. 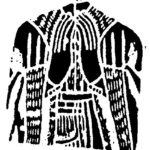 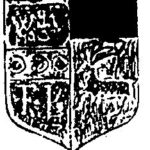 The brasses were all expertly examined in 1954 when the remaining portion of John’s damaged figure and their joint shield were loose. The shield was found to be a palimpsest, i.e. it had been re-used and the reverse (see illustration) is cut from the brass to a gentleman in a furred gown, c.1520, probably from London monastic spoil following the dissolution of the monasteries. The thickness of the shield is 3.25mm and the figure 2.5mm. For some reason, the initials ‘FL’ and W35(?) have been cut into the shield. Perhaps it is early graffiti?

The inscription is unexpectedly incomplete giving the wrong year and no date for John’s death and no year or age for his wife. The parish register, which could have been consulted, records the burial of ‘Mr John Penne Esquire on 12 Oct 1596 and of Mistress Ursula Pen, wid, on 2 May 1610′. This apparent neglect may reflect an uneasy relationship with their eldest son William since John’s will directs that a covenant to pay William an annuity to keep his family in meat and drink is only to be executed if William behaves himself. The reversion to a Latin inscription may be a last demonstration of their Catholic sympathies. The verse below translates roughly (with thanks to Earl Howe for help in interpreting some apparently rustic Latin)  as follows:

These limbs may be enclosed in an earthen grave
But only the stars hold their pious souls
Those whom love has united death has no power to separate
We have sealed together in this tomb.