Outside the south porch of Penn Church stands an impressively large tomb with a long, now largely indecipherable, inscription. It reads as follows: 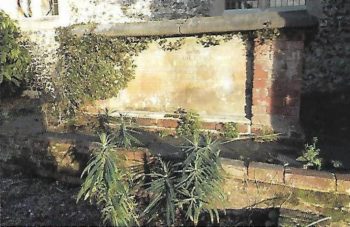 ‘Here lyeth the body of John Bennet born in the City and County of Coventry Feb 2nd 1663. Bred up a Schollar at the free School there went afterwards to ye University of Oxford from thence to be a teacher & instructor of Roger Penn Esqr. & his nephews, Sons to S. Nathaniel Curzon Baronet of Kedleston in Derbyshire. after he had done with these Gentlemen and they were removed from under his care the aforesaid Roger Penn Esqr, (the then worthy Patron of this Parish) Gave to him the Presentation to this Vicarage Sept. 9th 1700 into which being inducted Sept 29th following he continued Vicar to Feb ye 2d. 1715 on which Day he Dyed.’

John Bennet was only 52 when he died. The apparent contradiction in the date of his death is because, until 1752, the year was deemed to start from 25 March, so February 1715 on the tomb is today’s February 1716. 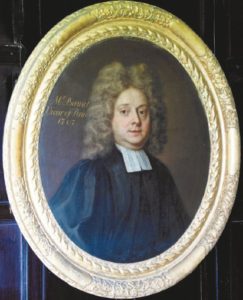 The tomb is in a place of honour right outside the south door, as perhaps one would expect for the much respected teacher of the Patron’s family and the subject of the only portrait of a Vicar to hang in Penn House. John Bennet was not ordained as a priest until 1700, the same year he became Vicar, and so Roger Penn must have offered him the job before he was even ordained.  There was no consultation with parishioners or selection process in those days! Perhaps further evidence of his Patron’s high regard is that the Register entry shows that he was to have been inducted as Vicar by the Bishop of Lincoln, but this was crossed out and so presumably cancelled shortly beforehand.

I was pleased to discover that John Bennet got married in 1708 to Mary Redrope. He was then 45, she was 28 and a particularly appropriate match as her great-grandfather Robert Rudrope had been Vicar a century earlier. There is no record of their having any children.

And so a very productive term of office came to an end. He has been occupying these pages for over a year and deservedly so.