The earliest surviving monument to anyone from Penn that I have found is a brass to John and Elizabeth de la Penne in St Mary’s, Amersham. It is a surprise to find that although the Muster Returns of 1522 show that John Penne was the biggest landowner in Penn with some 500‐600 acres he was living in Amersham ‘within the town’ where he was assessed with the second highest figure for moveable goods and a further 200 or so acres. He was the ‘firmarius’ or farmer of the Amersham glebe land, a role which also carried the responsibility for care of the church and churchyard.

Although the Penne family were lords of the manor of Penn they did not hold the patronage of Penn Church until Henry VIII granted it to John’s eldest son, David and his wife Sybil (neé Hampden) in 1541 and so John’s residence and burial in Amersham is less surprising. As a consequence of royal grants and patronage, the Penne family were to acquire much more land in and around Penn in the following century and thereafter they were all buried in Penn Church. 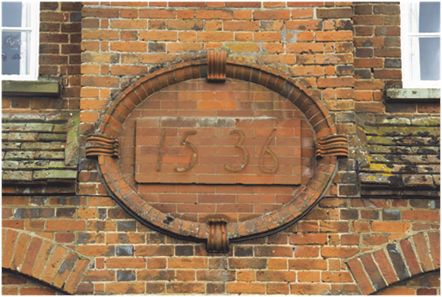 There is a plaque on the front of Penn House with the date ‘1536’ which Earl Howe is pretty sure is a souvenir ‐ and a genuine one ‐ from the Tudor house, two thirds of which was pulled down in c.1760.

The memorial brass is on the floor just inside the door of St Andrew’s Chapel in St Mary’s  Amersham. It shows John in civil dress rather than in the armour more usual in a landed family and he is described as ‘Magister John Penne’ in a will of 1520, which translates as ‘Master’ to indicate his social status. 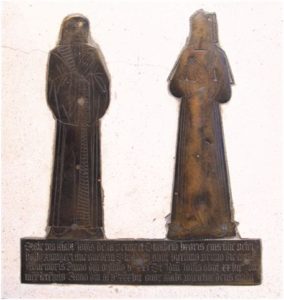 The same title was also used for the Rector of Amersham, the Vicar of Penn and another lord of the manor and could have indicated an MA. The French form of his name as ‘de la penne’ on the brass had gone out of fashion a century and a half earlier, and he was not using it when he appeared in the court hearing of 1520 or in 1496 when he was recorded as John Pen. Its use would seem to be a proud assertion of his ancient lineage. No brasses of any contemporaries survive in St Mary’s, which again tends to confirm his comparatively high status.

The previous article noted that earliest surviving monument to anyone from Penn seems to be the memorial brass to John and Elizabeth de la Penne, which is now under the carpet just inside the door of St Andrew’s Chapel in St Mary’s Amersham. It shows John in civil dress rather than in the armour more usual in a landed family, but a proud assertion of his ancient lineage would seem indicated by his use of the French form of his name which had gone out of fashion a century and a half earlier. 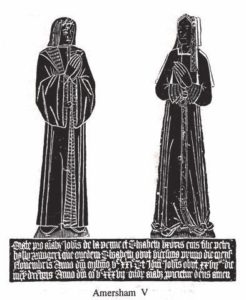 The Monumental Brasses of Buckinghamshire notes that two parts of the original brass have been lost – a depiction of 5 sons and 6 daughters as well as two shields bearing the arms of husband and wife – and observes that John’s date of death has been added later to the brass. The brasses were moved from the south transept to the north transept (now St Andrew’s Chapel) in 1973, but as there is no mention of the depiction of sons and daughters in a record of 1847 (George Lipscomb’s History and antiquities of the County of Buckingham), the damage must have been done earlier, perhaps in a move from the chancel. The style of engraving is of a London workshop of that period. The later addition of John’s date of death in 1537 indicates that the brass was engraved around the time of the earlier death of his wife Elizabeth, in 1521. A space (shown on  the right in yellow highlight) was left blank for John’s date from ‘obiit’ in line 4 below to ‘quor’ on the next line, but it was restricted and so the inscription is in a considerably more contracted form than his wife’s.

The inscription is in Latin, as was still generally the custom at that time before the Reformation, and the many contractions makes the words difficult to read, particularly when combined with the scribe’s uncertain Latin and difficult Tudor script. The original inscription has a line above a word or a superscript to indicate a contraction. The letters omitted are shown in red in the transcript below:

Anno uni m v xxxvij quorum animabus pro’picíetur Deus. Amen.
in the one thousandth year 5 hundred and 37 may God have mercy on their souls. Amen.