John was the only recorded son of William & Martha Penne, who we noted in the last article were both Catholic sympathisers although William later became High Sheriff of Buckinghamshire. The parish register does not include John’s christening and it may have been in Bourton where his mother was from. He had two sisters Sybil (Jeffries) and Kate (Winchcombe), who were christened in 1602 and 1608 respectively.

John married Sarah, daughter of Sir Henry Drurey of Hedgerley, and they had ten children, five boys and five girls. The fine brass in Penn Church shows them all in a neat gradation of size, although actually at least three died as small babies. There is also a brass to Sarah’s mother, Lady Susan Drurey, who died in 1640. 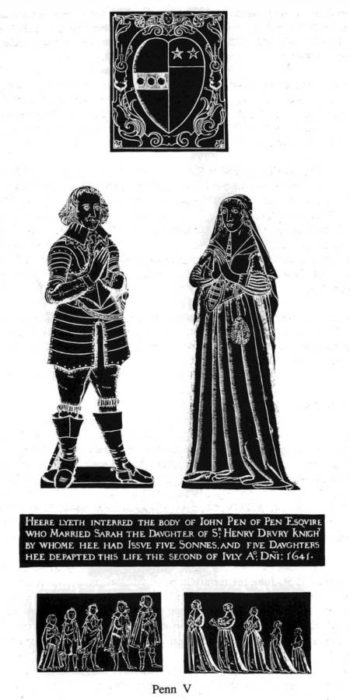 John died in 1641 only two years after his 72 year-old father and just before the Civil War got properly underway. His eldest son and heir, William, was only 12 and so until he came of age, at 21, he was a ward of the Crown and all profits from his estate were payable to the King.

A formal Visitation or inspection of Penn Church took place in 1637 (see transcript below), just two years before John inherited its patronage from his father. This was part of a national enquiry instigated by Archbishop Laud and it reveals a church in a dismal state: some windows without glass and partly boarded up, a leaking roof, seats in disrepair, the stone floor breaking up, the tower and buttress in a bad way. There were three huge family pews in the chancel (an important mark of a family’s social status), each 7 1/2 feet high and roofed, obscuring any view of the altar, with two more in the nave extending into the centre aisle and one at the front of the south aisle. If that sounds bad, it was worse at Chalfont St Peter where one side of the church was ‘so broken that a hog may creep through’.

Transcript of the 1637 survey of Penn Church

The wainscot over the com[munion] table to be repaired & the chan[cel] to be seiled throughout[.]  The ivy in one of the chan[cel] windowes to be pluckt downe.  A table of degrees[.]  A new service booke[.] A new cover for the font[.]  The porch dores are wanting & bars to be put into the windowes of the porches[.]  The chan[cel] wants sentencing & the church likewise to be new sentenced & also new painted.  The boards whereon the ten comandments are now written to be taken downe & the ten com[mandments] to be set up over the com[munion] table. The 2d tome of Jewell, wanting strange preachers[.] The west window in decay in the glasse[.]  Two windowes in the ile in the chan[cel] partly dambd up.

Mr Pens \seat/ to be taken downe to ye the marke[,] it being covered and 2 yards & ½ high.  Mr Nertons & Mr Allens seats built absque1 in the chan[cel] & Mr Pens seat and Mr Nertons seats stand into the middle chan[cel][.] It raines into in the south ile.  The com[munion] carpet to be fringd as the pulpit cloth.  The brickt bench joyning to the railes to be taken away quite.   Another flaggon suitable to [deleted word] that which is there.   There is a guilt chalice.  A peece of wood lying out of the wall to be cut off.  Mr Nerton commeth to Pen & doeth not keepe his owne parish church.   The high seats in the chan[cel] to be considered of concerning the turning of them as formerly vizt. Mr Pens Mr Allens & Mr Nertons.  [deleted sentence] The wainscot which is over the sepa[ra]cion of church & chan[cel] to be made up decently as in former time. The seats both of church and chan[cel] want boarding for the most part in the bottomes & also repairing[.]  [deleted word] Two or three new seats built towards the bellfry to high absque etc.  A high seat at the upp[er] end of the south ile vizt. Mr Caryes built as high as Mr Pens and covered likewise absque etc.  William Childes seat built into the south ile to high about a yeares seat since absque etc.

Qu[aer]e whether the reading seat which is now on the south side and is so high that it dambds up the light of the chan[cel] will be convenient if it be joyned to the pulpit which is on the north side[?]

The seats of the porches are want in decay.  Mr Long and Thomas Butterfeilds seats stand into the middle ile & are to be taken downe to the marke.  The board upon K[in]gs seat to be taken downe.  No chest nor locks.   The pavements in decay.  The south side of the mounds are hedgd and the rest raild.   The butterices & corners of the steeple in decay & the steeple church and chan[cel] want pargeting & the foundacion not sufficien[t.]