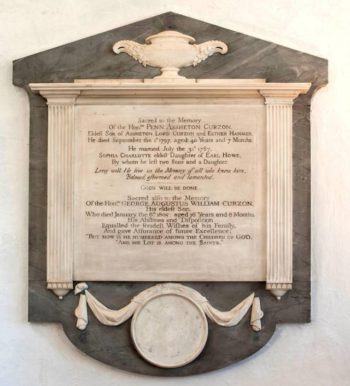 We have seen that Penn Assheton Curzon, the eldest son of Assheton Curzon, was an MP for family held seats including Leicestershire. There seems to have been a fashion in the 18th-century for using the surnames of maternal forebears as first names for boys. Penn was his great grandmother’s surname and his grandmother was an Assheton. I have come across the same custom with my own 18th century forebears.

In 1787, he married Lady Sophia Charlotte Howe, the eldest daughter of the First Lord of the Admiralty, later Admiral of the Fleet, Richard Viscount Howe. Their eldest son, George Augustus, was born in 1788, but died in his teens, and their second son, rather oddly named Leicester as a compliment to his constituents, was born in 1792, but he died at only 3 months old. They had one daughter, Marianne. Only one child, the third son, lived on into old age to become Earl Howe. He was christened Richard William Penn, although she called him Penn.

Penn Assheton Curzon died in 1797 when still only 40 years old. In 1773, he had inherited through his mother, Esther Hanmer, his uncle Charles Jennens’ Gopsall estate with probably the grandest country house in Leicestershire and his obituary describes him as of Gopsall Park, but nonetheless he was buried in Penn. There was a family vault to which the entrance was by steps down from the centre of the chancel, but it must have been full because a new vault was dug for him under the east end of the chancel which had been extended 60 years earlier. The vault was under where the altar now stands, and the entrance, now bricked up, was outside the east window. The Vicar in 1802, the Rev. John Middleton, was there when the vault was dug and recorded, ‘In digging the Vault, on one of the Foundation Stones the Date of the year 1177 was legible, by which we may conjecture that the Church or rather the Chancel was built….in that year.1

Arabic numerals were not yet in use in Europe in 1177 so the inscription would have been in Latin numerals, MCLXXVII, but the Vicar was an educated man, tutor to ‘several young gentlemen‘, kept meticulous entries in the parish register and would not have thought it worthy of reporting. It is apparently unusual to find a foundation date, but he is a very credible witness.

Some 30 years ago I went into the extended vault with Earl Howe. It was only 4 or 5 feet high with a daunting collection of about a dozen decaying coffins, many with coronets. Bones had fallen out of some of the coffins. The inscriptions on metal plates were corroded but had apparently been recorded some 20 years earlier by the Vicar. We didn’t find the foundation date because in retrospect we were looking in the new section of the vault and should have been looking at the back where it was walled off from the original vault.