Two hitherto unpublished documents in the Buckinghamshire Archaeological Society’s library give both sides of an angry dispute between an earlier Vicar of Penn and the Bishop of Lincoln. They throw a revealing light on the fierce religious arguments of the day and show how closely intertwined were church and state and how strongly the bitter memories of the Civil War and the Revolution of 1688 continued to dominate political and religious controversies well into the eighteenth-century, with violence and civil war very close to the surface.

Benjamin Robertshaw was Vicar of Penn from 1716-28 and rector of Amersham from 1728-44.  His memoir, 15 closely written pages, is preserved in the Bucks Archaeological Society’s library in Aylesbury and I quoted from it when writing in the February newsletter about his friend and patron, Roger Penn, the last male heir of the Penn family. It is a well written review of the major events and people in his life, looking back when he was about 60 years old. 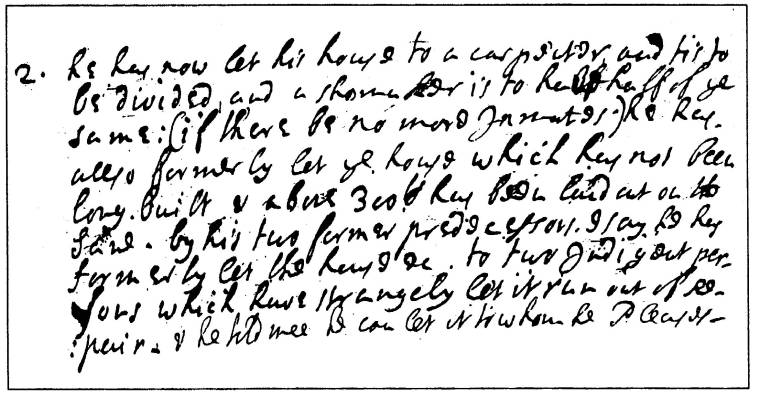 He was born, in 1679, near Burnley in Lancashire and was educated by his father who was a schoolmaster. He took a degree at Brasenose College, Oxford and, in 1702, arrived in Amersham to run the Free School there at the invitation of the Rector, Humphry Drake, an earlier graduate of Brasenose. He was ordained two years later and married Mary Salter of Amersham in 1709. He was very hard up and couldn’t find the money to take his degree and he had to hold three jobs at once, deacon at Amersham, curate at Chalfont St Giles as well as continuing to run the school, ‘that arduous business‘, he called it.

An extremely unflattering assessment of Robertshaw’s performance as Vicar of Penn is given in a long three page memorandum from Daniel Baker, a wealthy and well-connected Penn parishioner who lived in a large mansion overlooking the common by Widmer Pond. He was High Sheriff of Buckinghamshire when he wrote the memorandum to the Bishop of Lincoln around autumn 1721 (see extract below). Daniel Baker complained that Robertshaw lived in Amersham because of his school; let his vicarage in Penn to a carpenter and shoemaker; neglected his parishioners, never visiting them; hated dissenters, preaching against them and refusing to either register or bury any that had been baptised by Presbyterian ministers whose authority to preach or baptise he refused to recognise because they had not been ordained by a bishop. He was reported to have described dissenters in sermons as, ‘the most turbulent and seditious people in the world and added ‘schismaticers‘ (i.e., all those who had broken away from the Church of England) to the biblical description of those ‘dogs, and sorcerers, and whoremongers, and murderers, and idolators, and whosover loveth and maketh a lie‘, who were excluded from heaven.

Robertshaw also reportedly refused to pray for King George and took the compulsory oath of fidelity to him only with great reluctance. Furthermore, Daniel Baker accused him of being an overt Jacobite and possibly a Catholic sympathiser who, in 1715, had preached publicly in favour of the Old Pretender. Daniel Baker had no time for Jacobites. In 1715 he had written to his brother-in-law, Lord Fermanagh, ‘You are too much a Protestant and Lover of the Country than to Embarque in any such wicked design, as to bring in the Pretender, which consequently must be to bring in Popery and Slavery with him …. therefore I am the more surprised at this time to find any English gentleman for him ... ‘

A wholly damning indictment apparently, but as we shall see in Part 2, the Rev. Robertshaw saw no shame in such accusations and made no attempt to deny them. In this he was supported by many of the most influential gentry and clergy of his day.