In Part I, we looked at the origins of Lollardy with John Wyclif in Oxford in the 1380s, and at his radical proposals for a bible in English to provide the ordinary person with direct scriptural authority . Part 2 discussed Foxe’s Book of Martyrs, first published in 1559, the main source of information about Lollards.

It was not Wyclif’s intention to start a breakaway church, but one of his proposals had been to train ‘poor preachers’, ordinary laymen who would work with parish priests teaching and preaching. After he died, in 1384, itinerant preachers encouraged the rapid growth of Lollard groups meeting in houses to read the Bible and discuss their radical ideas.

The Peasants’ Revolt of 1381 was a recent and frightening memory and the authorities were alarmed. In 1401, a statute was passed by Parliament, de Haeretico Comburendo ‘Concerning the burning of heretics’, which empowered bishops to arrest, imprison and examine offenders and hand them over to the secular authorities to be burnt ‘in an high place’ before the people, if found guilty. However, recantations were, understandably many and only one man, a priest from Norfolk, suffered this penalty in the following decade. The 1401 Manor Court Rolls of Wycombe record that ‘John Dryvere doth not set up a cross upon his house’. Lollards believed that worship or reverence of the sign of the cross was committing idolatry.

In 1413, Sir John Oldcastle, Lord Cobham, the most important Lollard leader, was arrested and sentenced, but escaped from the Tower and organised a rising outside London in 1414, which was suppressed by the young Henry V in person. Oldcastle escaped, but was eventually recaptured and burnt at the stake in 1417. 39 others involved in the 1414 rebellion were hanged or burned five days later, and they included three men from Amersham and one from Missenden. The so-called Merciless Statute of 1414 ruled that those convicted of heresy forfeited all their possessions, but the King made a compassionate exception for these widows and children. 40 others were pardoned, five of whom were priests, and they included the Parson of Latimer, a fletcher from Wycombe Heath who used grey goose quills, a carpenter from Amersham and two men from Wycombe. 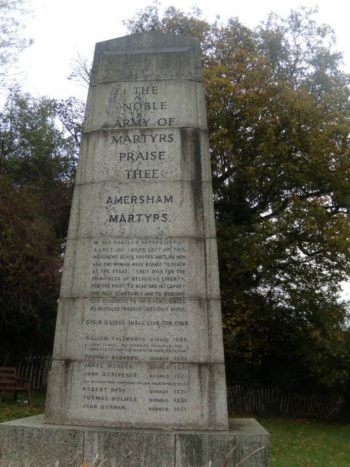 Wyclif was formally declared to be a heretic in 1415 and his bones were exhumed and burned in 1428. Large open gatherings were no longer attempted and the Wars of the Roses dominated the authorities’ attention.  The movement went largely underground, continuing to flourish for a further twenty or so years before gradually diminishing in numbers and importance, but still surviving. Evidence of Lollard sympathies around Penn is provided by the Vicar of Chesham, who was forced to recant of heresy in 1428, and the imprisonment for life of the parish priest of Hedgerley.

There was a small circle of landed proprietors in our part of the Chilterns, sympathetic to the Lollards in these early years and it may well be that this encouraged the unusual focus of Lollardy here. The will of the Lord of the Manor of Coleshill left several English bibles to Oxford University in 1457 and in the Bishop of Lincoln’s register four Amersham men recanted in 1462. Eleven heretics are recorded as having been burnt between 1401 and the accession of Henry VIII in 1485.  Foxe speaks of ‘a godly and great company’ of Lollards at Amersham, who had been meeting since at least 1495.

1 The Martyrs Memorial off Stanley Hill in Amersham commemorates the Lollard martyr William Tylsworth, burnt there in 1506, recorded in Foxes Book of Martyrs.

Continued in ‘Interesting Vicars of Penn‘

Continued in ‘Monuments and Memorials‘