Early in the 15 C, at about the time that Henry V was fighting the French at Agincourt (more about the bowmen of Penn later), the parishioners of Penn once again contributed generously in money and labour to improve their church.

The roof of the nave was removed and several feet were added to the walls with the fine timber structure which is so admired today resting on decorated corbels. The additional walls were thinner than the original as can be clearly seen inside the nave.

At some stage, a plaster ceiling was added between the timbers and it was not until 1923, in the course of work on the roof, that the plaster was removed to reveal more of the interesting 15th C woodwork. 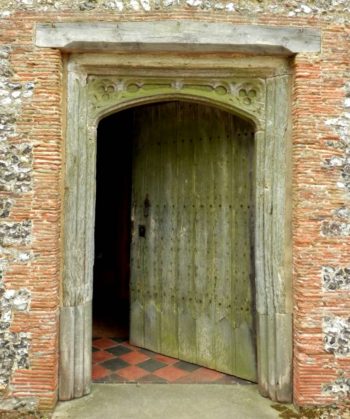 The north porch has a heavily timbered oak frame to the the outer doorway which has the same tracery in the spandrels (the roughly triangular space between the curve of the arch and the enclosing right angle), as on the roof of the nave. This suggests that the porch is also early 15th C and the heavy door frame indicates that it was originally a timber porch which was later walled in.

Mr Muspratt discovered a grave lined with 14th C Penn tiles immediately outside the north porch and this had presumably been forgotten when the porch was built about a century later requiring worshippers to walk over the grave.

The south porch has part of a moulded beam over the entrance which also probably belonged to an earlier 15th C timber porch mostly rebuilt in the 18th C.