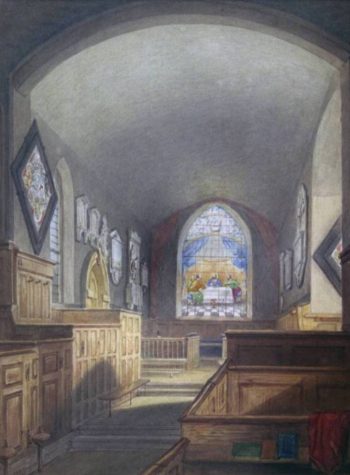 We are all used to the idea of our church having just one main altar under the east window and, more recently, a side altar in the chapel, but this has not always been so. In the Middle Ages, even modest country churches could have perhaps a dozen altars, many of them in the nave and under the control of the parishioners. The Protestant Reformation in the mid-16th century swept them all away and there was, in effect, no altar at all for three centuries. There was just a low table with cushions and a bible and no crucifix (see the Ziegler painting of the chancel, c.1850, in the church). It was not until 1865 that our own Victorian ‘restoration’ set out the church much as we see it today.

We can identify many of Penn’s medieval altars from bequests made in wills before Elizabeth I’s accession in 1559 marked the very end of any Catholic practice. I have seen 12 out of the 16 wills that survive from this period, the earliest dated 1492. They show bequests to 8 named altars or to the ‘lights’ that were burned in front of them.

Those named are shown in bold:
The stone High altar was where the main Mass was celebrated, and as prescribed by Canon Law, it had curtained niches on each side for the principal image of the Virgin (to the south), described as Our Lady light, and for the patronal image, in our case, of the Trinity (to the north), represented in another church by an old man, a crucifix and a dove. The Rood light was on the Rood loft below the Rood, which dominated the nave beneath the painting of the Doom. Candles were kept burning there all the time, tended by a Roodman. The Sepulchre lights were for the Easter sepulchre, an elaborate carved stone tomb in bigger churches, but probably a moveable, painted and gilded, wooden timber hearse in a country parish, around which dozens of candles were burned and a continuous watch kept over Easter.

In 1505, Thomas Alday of Nattetok (Knotty Green) left a swarm of bees to provide wax for these candles as well as 6s 8d to repair the roads of the parish. Thomas Eggam (Eghams Farm) was a witness.

Roger Playter left 4d to the priest ‘to say Mass in the chapel for my soul at a time convenient’, and John Salter left 12d to the Chapel of the Blessed Mary. There was a separate altar, somewhere, to Our Lady of Pity, which typically represented Mary as a grieving mother holding the crucified Christ and was a very popular image in late medieval England. John Puttenam left instructions that he was to be buried in the churchyard ‘nigh unto the aulter of the holy appostylle.’ This altar could have been in the south aisle, perhaps in front of a carved wooden screen to the Lady Chapel.

Three bequests to the High altar were for ‘for tithes forgotten’. The Church prudently taught that debt to the Church would result in excommunication, nullify the benefits of prayer and alms-giving and leave the soul for longer in purgatory.

The amount of the bequest to each light varied between 1d and 12d, usually 2d or 4d, and this totalled 46d for John Salter, quite a considerable sum when 1d was the daily rate for a labourer. The smallest total was 3d from Nicholas Asshwell. William Grove gave a sheep each to the Rood light and the Trinity light. All the earlier wills made a bequest to the ‘Mother Church of Lincoln’, Le., Lincoln Cathedral. Most testators named only two or three lights, adding a general bequest to each of the other lights, and it is very likely that there were more unnamed side altars in the nave and south aisle which reflected the particular devotional choices of the parishioners. St Anthony, the healer of men and farm animals, St Anne, believed to be Jesus’s grandmother, who could help with women’s fertility, and various apostles, were popular choices. A simple Mass would be celebrated at a side altar on weekdays, not the elaborate ritual of a Sunday Mass at the high altar behind the Rood screen.

The images and their niches or tabernacles were painted and gilded, and offerings of flowers, money candles, rosaries, kerchiefs and rings were made to encourage their interest and intercession.