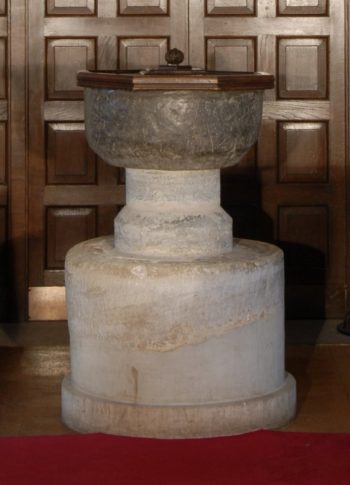 The dating of the various components of the font matches this historical data (Previous article, ‘Historical Background‘).
All the principal authorities (RCHM,[1] Clive Rouse,[2] NADFAS[3]), agree that the Purbeck marble stem and base are 12th C (Clive Rouse thought late 12th C).  They also agree that the circular platform on which it stands is formed of a ring of clunch (hard chalk) with a filling of red brick and cement that looks like it was once the base of a Norman, 12th C, pillar. There was no font cover shown in a pencil sketch of the font made in 1819.[4]  The present octagonal, oak lid is Victorian, its shape laid down by the leaders of the Gothic Revival as representing the seven Sacraments and crucifixion.

The Purbeck marble of the stem and base is likely to have come from one of three sources – the Isle of Purbeck in Dorset, Petworth in Surrey or Bethersden in Kent.  Ready-made pieces were produced in these factories.  It is not a true marble but a hard limestone chiefly composed of fossilised fresh water snails varying in colour from creamy white, grey, light brown, green and blue.  It can take a high polish and can be darkened to a near black with varnish or oil.  The beauty of the highly polished marble was preferred to richness of design, but if left in damp conditions, over the centuries it flakes and roughens, as ours has done, and this is why Purbeck marble went out of fashion in the 14th C.[5]

The dating of the cup-shaped bowl itself presents problems.  It is not a solid lead font, it is a stone font covered with lead.  The stone is completely concealed, inside and out, under a layer of lead, which is generally dated to the16th or 17th C, presumably on the basis that graffiti scratched into the lead on the outside of the bowl, run from 1626 to 1776.  RCHM assumed that the bowl itself was probably 16th or 17th C; Pevsner declared it to be a bowl of uncertain date[6]; Clive Rouse thought that the lead was 16th or 17th C, possibly covering an original bowl; and NADFAS declared the bowl shape to be of the Transitional period, c.1200.

However, there is a visible clue to the age of the bowl that all these eminent authorities appear to have missed.  A church law, dating from 1236, required medieval fonts to be kept lidded and locked to prevent the theft of the holy water, highly valued for cures and for witchcraft.  The lids were required to be secured by a padlocked metal bar across the top.  The metal bar usually passed through two large iron staples set opposite eachother in the top rim of the font.  This arrangement was probably in general use before 1236, but thereafter, throughout the Middle Ages, Bishops’ visitations included a check that it had been done.[7]

This requirement ceased abruptly with the Reformation, after which belief in holy water was regarded as idolatrous.  The staples were removed, often leaving either a stump or a hole, and their presence is firm evidence of a pre-Reformation font.   We have exactly this evidence on our font.  On one side of the rim there are two 5/16 inch diameter stumps standing just proud under the lead about 2 inches apart, and directly opposite there is one corresponding sunken hole of similar size.

We can therefore be confident that we have a medieval stone bowl whose dimensions (2 ft 2 inches wide, 1 ft deep) and shape are consistent with the late 12th C.

A particularly meticulous and reliable vicar of Penn, who had supervised the digging of a vault under the east end of the chancel in 1797, reported seeing the date 1177 on a foundation stone.[8]   This accords with:

We can therefore be confident that our font is as old as the church and that both are over 800 years old.