Penn is typical of almost all old parish churches in that it grew steadily during the centuries following the Norman Conquest in order to accommodate a growing population and a more elaborate ritual, as well as in response to developing architectural techniques and fashion. We would not recognise the very simple 12th century church, probably consisting only of a small nave (Latin, navis, a ship, from its shape) and chancel, which were to be radically enlarged and rebuilt by almost every succeeding generation. There was no antiquarian prejudice in those days to preserve the older church intact.

No recorded details of the many changes to the fabric of the church have survived from the Middle Ages, although changes of ownership, discussed in earlier articles, sometimes offer us promising benchmarks. 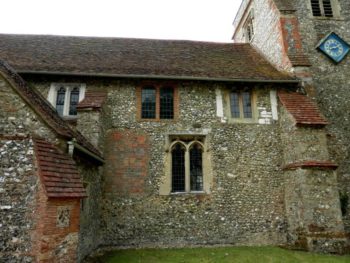 The flint and clunch of which the walls are built do not offer any clues as to their age, but the shape and design of the windows and doors tell us (roughly) when they themselves were put into the wall, always bearing in mind that styles overlapped by a generation or two and that windows and doors came and went in the same wall. The north wall of the nave illustrates this very well. The nine windows that you can see as you approach the porch from the lychgate are of five different periods and four of these windows were found, blocked up, (two still are) when the roughcast was taken off the outside of the walls, in 1951.

There was a very effective renovation and inspection of the church in 1951, master-minded by the Rev. Oscar Muspratt and carried out with care and skill by Frank Perfect & Son. Mr Muspratt must take great credit for ensuring that the work was carefully monitored by experts at every stage and has consequently added enormously to our knowledge of how the church developed.

The Nave. – We have already noted (part 2) that Dr Clive Rouse was able to assign the yellow mortar used in the north wall of the nave, to the 12th century and that this ties in with the date of 1177 reportedly seen on a foundation stone under the chancel. Interestingly, 1177 also ties in with the very start of the Early English phase of church architecture when the Gothic pointed arches started to replace the earlier Norman or Romanesque round headed arches, in small churches, following the example of the Canterbury Cathedral choir.