There are still some important questions to ask about religious life in Penn in the Middle Ages, and a particularly interesting one is the extent of Lollardy, which was the first heretical movement to gain any ground in England after a thousand years of Catholic Christianity. 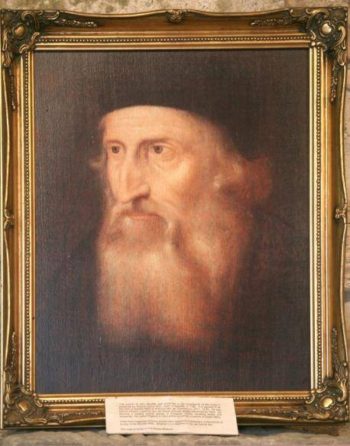 A painting in Wycliffe church believed to be John Wyclif

Before we look at Penn we need to look at the wider picture. John Wyclif (c.1330-84), a priest, theologian and philosopher of Balliol College, Oxford, was its inspiration. He articulated the strong sense of discontent with the wealth, power and pride of the clergy, which had been encouraged by the disorder in the Church following the Black Death and by the growing subversive sense of independence amongst ordinary people. This was allied with the anti­clerical feeling amongst the nobility. whose own arrogance and avarice had been encouraged by years of war with France. Wyclif was protected during his lifetime by sympathisers as powerful as the Black Prince and John of Gaunt, Duke of Lancaster.

The term Lollard was first recorded in 1382 and, at first, was used widely to include anyone in opposition to the Church, whether anti-clerical knights of the shire, riotous Abbey tenants or parishioners refusing to pay their tithes. ‘Every second man was a Lollard’. The origin of the word is uncertain, but the most convincing explanation is from a Dutch word meaning ‘to murmur or mutter’, presumably against the Church.

Wyclif, like John Wesley four hundred years later, did not himself advocate setting up a breakaway church, but argued for radical reform. He called for a church whose members took their authority from the Scripture and the Holy Spirit and not from Sacraments or a corrupt priesthood. He attacked any practice not authorised by Scripture, including the wealth and secular interests of the clergy and their celibacy, and roundly condemned absolution, indulgences, pilgrimages, prayers for the dead and the validity of any sacrament in the hands of a sinful priest. Even the Pope should not be obeyed unless warranted by Scripture.

He therefore encouraged the reading of the bible in English rather than Latin and instigated the training of ‘poor preachers’, laymen, to work alongside parish priests.

This was all dangerously subversive, but it was his attack on transubstantiation, the central Catholic belief that the bread and wine of the Eucharist or Holy Communion become literally the flesh and blood of Christ, that crossed the line into heresy and became the usual test in trials for Lollardy. Lollards believed in a spiritual rather than a physical raged the Eucharist – ‘It is but a mouthful of bread’ the more courageous would reply.

Wyclif was way ahead of his time and his theology went far beyond that of the Anglican compromise established after the Reformation. In 1382, the Archbishop of Canterbury condemned twenty-four of Wyclifs ‘conclusions’, ten as heresies and fourteen as errors. Wyclif himself was not punished, although others were, and this was the start both of persecution and of a great extension of the movement during the last years of his life.