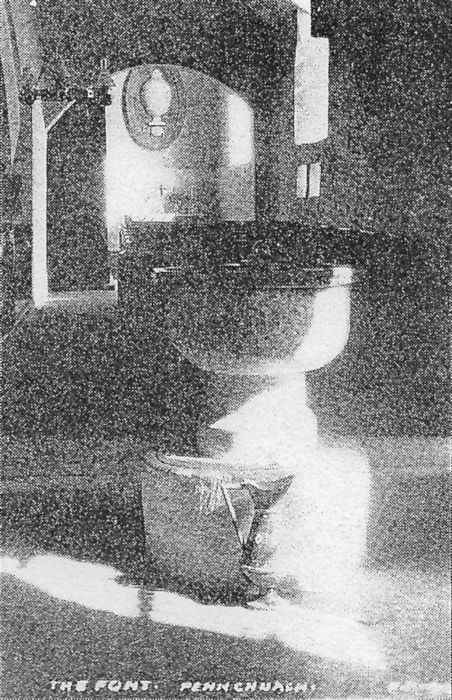 The earliest specific record of the font is a pencil drawing of 1819, which notes that the bowl is lead. However, there is no doubt that we have a medieval font, for reasons that I will go into in a later article, but let us first consider its appearance.

It is not a solid lead font as many suppose, but it is an early medieval stone font covered with 16th or 17th C lead.. The font is covered with three separate pieces of lead sheet joined by seams ~ one flat on the bottom inside with the drain pipe in the centre; another around the inside walls turning over on the top rim; and a third around the outside, hammered into the chamfered shape of the underside. Many porous stone fonts had inside linings of lead on the bottom and sides, but to cover the outside with lead as well seems to be almost unique.

I am told, by Mr W.N. Paul, who wrote a very informative article on English fonts in the journal, The Local Historian (Vol 23, No3, Aug 1993), that he has only come across one other example of a stone bowl encased in lead and that is the 12th C font at Ashover in Derbyshire. (Does anybody know it?). Like ours, it has a small 2 ft diameter bowl, but, unlike ours, the lead is decorated with the figures of the twelve Apostles. We therefore need to look for an explanation for our unusual font. There seem to be two possible reasons – to conceal either decoration or damage.

Fonts were at considerable risk from Puritan zealots at the Reformation, who saw them as symbols of Popish superstition and preferred a simple basin. They believed that ‘a child could just as well be christened in a tubb of water at home or in a ditch by the way, as in a founte stone in the church‘. So many fonts were being damaged or removed that, in 1561, Queen Elizabeth issued a Royal Order requiring that ‘the Font be not removed from the accustomed place: And that in parish churches the curates take not upon them to confer Baptism in basins but in the Font customably used.’

Many parishes defied this royal order and the simpler and plainer a font, the more likely it was to survive. Penn’s font is far plainer than most anyway, but it just may    have decorative carving around the outside which needed to be concealed. Elsewhere, such carving was sometimes plastered over for the same reason. There is a mildly encouraging hollow ring when the lead is tapped.

Still more damage was done to fonts by Puritan zealots in the Civil War and Commonwealth, from the 1640’s to 1660, but the date of 1626, scratched into the lead by a bored parishioner, tells us that our font was already covered in lead by then.

Alternatively, and perhaps more probably, the lead might conceal damage done to the font. There is some denting in two places around the underside of the bowl; the Purbeck marble stem and base have been cemented together at some stage; and the circular stone platform has been badly damaged. We have no record of when all this damage happened, whether on one or several occasions.

It could have been the result of one of several moves to different positions in the church. The font must have first been placed in the nave and then moved to the south aisle when it was added on in the 14th C. The 1899 photograph shows it in the south aisle and you can see that the stone platform had already been damaged. It could have been further damaged in the most recent move from the south door to the west door in the 1950s. However, the overall damage is also consistent with a violent attack on the font during the Reformation perhaps followed a century later by a further damage during the Civil War and Commonwealth.