Ecclesiastical law and custom required a church to face to the east, the direction from which Christ, symbolised by the rising sun, was supposed to come on Judgement Day, and graves are still always aligned east-west for that reason. But where is east? The direction of sunrise in England moves through 80° between midwinter and midsummer, at about 3° every week, so it depends what date is chosen. In addition, there are topographical questions about whether there is any horizontal view of the horizon from the site of the church that is not obscured by trees or blocked or enhanced by hillside or valley; or whether the sun was shining at all at dawn on the day when the line of the church was first laid out.

Durandus, a 13th century French bishop and leading canon lawyer, reported an early tradition ‘that the head of the church lies exactly to the east, that is to the part of the sky in which the sun rises at the equinox.’ The vernal equinox was supposed to be 21 March. If this was the rule, then we would expect all the medieval churches in our area to be pointing in roughly the same direction, at 90o to tru North, but they do not. Measuring from a large scale map, Amersham is 76°, Beaconsfield is 82°, Penn is 86° and High Wycombe is 96°. When we look countrywide, we find a spread of some 75° around true east (Lichfield cathedral is 40° W, and Rochester cathedral at 35° E). 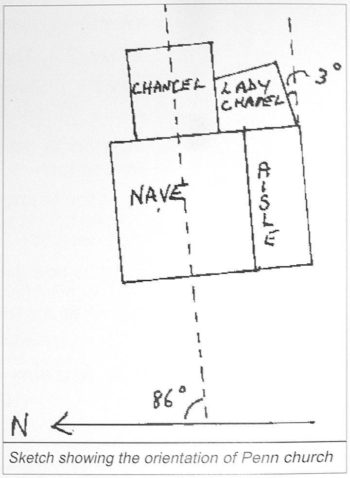 Several ingenious explanations have been proposed to explain this lack of any uniformity; that it was the choice of sunrise on the day of the saint to whom the church was dedicated (but note that re-dedications were common and that feasts like Holy Trinity are moveable because they depend on Easter and the full moon); that it was sunrise on the day of important church festivals (there were 40 or 50 important enough to be observed as feast days , spread throughout the year); that a magnetic compass was used, thus introducing the very variable factor of magnetic variation over time, which medieval man did not realise (e.g. magnetic north was 11.5° E oftrue north in 1576 and 24.3° W in 1815); that the medieval Julian calendar was running a week or more behind solar time (medieval scholars were aware of this, and 11 days had to be added to catch up with the sun when the present Gregorian calendar was adopted in 1752). One or other of these explanations will often fit a particular church or sometimes a group of churches, but there is no single satisfactory explanation.

In Penn church, the medieval nave and south aisle and the 18th century chancel are all in alignment, but the walls of the chancel arch and outer walls of the Lady Chapel and are 3° out of line to the north. (An accurate check was made by Eddie Morton, measuring off a laser line running along the centre of the nave, set parallel with the north wall of the nave, and confirmed using a chalk line along the outside walls of the Lady Chapel) This tells us that the Lady Chapel was not built at the same time as either the nave (late 12thC) or the south aisle (early 14th C). Typically, the 13th century saw a rounded sanctuary enlarged to a square-ended chancel with the addition of a chapel in the SE corner where our Lady Chapel is. This presumed 13th C chancel (the walls of the present chancel arch are not square to the nave either) and our Lady Chapel were unlikely to have been built out of alignment with the older nave as a result of careless workmanship nor, as the mere fanciful would have it, to create a ‘weeping chancel’ as a symbol of Christ’s head on the cross inclined northwards towards the penitent thief.   It is quite common to find a nave and chancel on different alignments and it appears to have been a deliberate attempt to correct the ‘mistaken’ direction of earlier builders – which shows that they were trying to achieve a medieval church in our area to be pointing in roughly precise alignment of some kind, although for Penn it was about 83° and so still further away from true east.