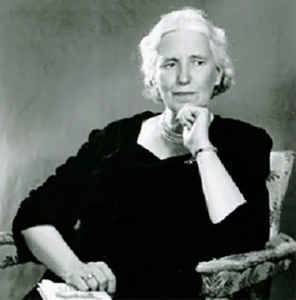 Alison Uttley (17 December 1884 – 7 May 1976), née Alice Jane Taylor, wrote over 100 books, though best known for a children’s series about Little Grey Rabbit and Sam Pig. She is also remembered for a pioneering time slip novel for children, A Traveller in Time, about a plot to free Mary, Queen of Scots from Wingfield Manor, a setting close to where she was born in Cromford Derbyshire.

She grew up in rural Derbyshire, and was educated at the Lena School in Holloway and the Lady Manners School in Bakewell, where she developed a love for science which led to a scholarship to Manchester University to read physics. In 1906 she became the second woman honours graduate of the university and she made a lifetime friendship with the charismatic Professor Samuel Alexander.

After leaving university, she trained as a teacher at Hughes Hall, Cambridge and in 1908 took up a post as a physics teacher at Fulham Secondary School for Girls in West London.  In 1911 she married James Arthur Uttley, and in 1914 they had her only child, John Corin Taylor. James Uttley was prone to depression and drowned himself in the River Mersey in 1930.  From 1924 to 1938 the Uttleys lived at Downs House, Bowdon, Cheshire,  In 1938 she moved to Ellwood Road in Beaconsfield, to a house she renamed ‘Thackers’ after the house in her book ‘A Traveller in Time’. 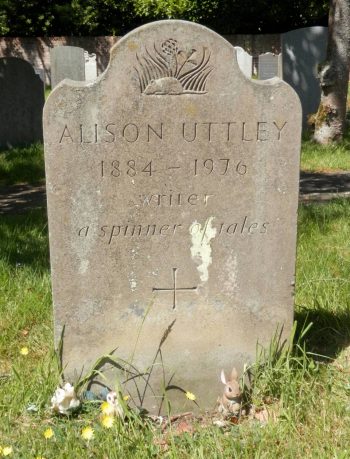 Alison Uttley, ‘A spinner of Tales’

In later life Uttley said that she began writing to support herself and her son financially after she was widowed, but in fact her first book was published in 1929, before her husband’s death. Uttley recorded that one inspiration was a meeting in 1927 with Professor Alexander at a painting exhibition in Altrincham, at which he confused her with another ex-student and asked if she was still writing. Her first books were a series of tales about animals, including Little Grey Rabbit, the Little Red Fox, Sam Pig and Hare. She later wrote for older children and adults, particularly focusing on rural topics, notably in The Country Child (1931), a fictionalized account of her childhood experiences at her family farm home, Castle Top Farm, near Cromford.

In her book Buckinghamshire, (1950), a collection of reminicensces and recollections, rather than a guide-book, she recalls walking up the lane from Knotty Green towards Penn church, with a young school-girl, Joy Allen, who walked from Brindle Lane in Knotty Green, to Penn School.  Together observing the flowers, birds and the beauty around them (pages 8-11 reproduced below).  Joy Allen became Joy Feast when she married, and contributed to the articles on Penn Church school on this website.

In 1970 the University of Manchester awarded Alison Uttley an honorary degree of Doctor of Letters in recognition of her literary work.

In 2009 her private diaries were published, and she has been the subject of two biographies

“Sometimes I walk to Penn by the narrow lane among the cherry trees, instead of branching off at Forty Green to the wood­land path. Except for the hamlet cottages, the lane seems empty, but there are many invisible denizens, as I found out one day when I walked with a village schoolgirl. The lane is said to be the old pack road from Penn to High Wycombe. It was the road taken by the children who went to Penn school. No motor-bus carried them; they had the inestimable boon of walking and observing and getting to know a country lane in all the seasons of the year, and the memory of it will stay with them for life. Now, unfortunately, the school is closed, like many village schools. (Penn School closed 1949).

I walked with little Joy Allen along the narrow lane with its deep high banks on the sides, and red apples hanging tempt­ingly over the well-plashed fence. It is a celandine, wild violet, cherry blossom lane in spring, a wild rose and wild strawberry lane in summer, a lane for traveller’s-joy and bryony, for dog­wood and spindleberries, for blackberries and hazel nuts in autumn, and in winter, when snow is deep, rich red and amber ivy on the sandy banks.

From these banks we could see bright eyes watching us from behind the leaves, peering from screens of feathery grasses or from under the ivy, or behind yellow deadnettle and shining stitchwort. Shirt-buttons the country children call the white flowers of the greater stitchwort, and each little flower head resembles a highly ornamented pearl button on a fine linen shirt. So we found nests of robins, of thrushes, of tits, and the child told me of the secret life she shares with these birds, looking out for them each morning and evening, enjoying their friendship. She is an observer of rare quality, and has the quiet, listening attitude, the retentive memory and experimental zest that make up a naturalist.

The village of Penn runs along the crest of the hill, 540 feet up, and there is a climb till the old village is reached. On the side of the road opposite the ancient church are two tiny cottages which give me more pleasure than many a famous house in a great park. Their enchanting names are Robin and Wren. These two little rosy-bricked timbered cottages are comfortable and happy places. They have great fireplaces, now bricked up, where little modern grates are fitted, and the outside chimneys remain, ivy-covered and strong, against the walls.

I first noticed these cottages when the Madonna lilies were in bloom, for a snow-white company stood close to the walls, growing in abundance under the kitchen windows.

Opposite the cottages is a field gate, where every climber “lops and stands and stares, for there is a magnificent view across the country, and Windsor Castle can be seen on fine days. Perhaps every village has its own gate where there is a special view, I have come across many in Bucks, and there is usually a countryman leaning there, admiring, dreaming, ready to point out the features which seem invisible at first.

The house on the hill-top, The Knoll, was the home for a time of Princess Anne, who was sent there while Mary reigned with William of Orange. A delicate little belvedere is called Princess Anne’s window. From it the Princess must have seen Windsor and the vast panorama below. This is now the home of Viscount Curzon of Penn.

The early fourteenth-century church stands in a commanding position, From the summit of its tower one can see fifteen counties, I am told, but I prefer to think of that view of the sky the watchers had recently. The Observer Corps have gazed out during the war years, scanning the starry sky for enemy planes, watching day and night against invaders. The church tower of Penn is a great look-out place, like a lighthouse in the green sea of Buckinghamshire.

There are fine yews in the churchyard, and some wooden grave heads on which I always see robins perched. They seem to prefer the warmth of the wood to the cold tombstones.

The church at Penn is beautiful in its simplicity, with its whitewashed walls, its painted hatchments, its stone porch. The pews have doors with latches, so that one feels secure, kneeling there.

I remember the first sermon I heard at Penn, It was a lovely spring day, the sky azure as a harebell, the air sweet as honey, scented with flowers, Butterflies and bees were about, a yellow brimstone fluttered by the church door, and arabis and daffodils bloomed in Wren and Robin cottages, and in the churchyard.

“As I came across to church this morning, I looked up at the sky and thought to myself, ‘This is a day to thank God for,'” began the aged clergyman, and his sermon was a simple talk about eternal country things.

Again, I think of Christmas in this old church, and the wreaths of holly berries and fir, and the beautiful crib with its roof of straw at the west end under the tower, and the Holy Child in the manger, with ox and ass, and little village children staring amazed at the miracle. It seems an integral part of the country church with its whitewashed walls.

At Easter the church is decorated by the children with flowers they have picked. There is a bed of white violets in the deep moss-lined window of the porch, and wild cherry blossom from the woods hangs in tumultuous foam by the altar. Daffodils fill the leaden font, one of the few lead fonts in the country.

– The roof is fifteenth-century and has six traceried queen-post trusses which stand on stone corbels, with shields and heads of bearded men and angels. The tower has a ring of five bells with some interesting inscriptions.

“The treble, dated 1702, is inscribed:
I as trebell do beegin, and the second says:
Feare God, honour the king.
The fourth has
In Penn tour for too sing,
nd the tenor says:
Unto the church I doo you call
Deth to the grave will summans all.”


Over the woods and down the valleys chime these bells, the sound carried by the wind, sweeping from the high tower on the hill.

“The Doom,” the famous wall painting, was discovered in I 938. Some oak boards covered with plaster were moved from the wall above the chancel arch, and colour was noticed upon them. A medieval picture of the Last Judgment was found there, painted in bright colours. The original work was done in the fifteenth century, and it was repainted in the same rich colours, during the same century, with different scenes. There is Our Lord on a rainbow, with red-winged angels around him, blowing trumpets and carrying symbols of the Passion. Twelve apostles below, with the Virgin Mary, are standing on a green hill, with souls rising from their graves. It is a picture which was made for the enjoyment and instruction of those people of medieval days who had a lively and imaginative church to satisfy their needs. Now it hangs on the south wall, with a curtain to preserve it from the light.

There is a stone coffin in Penn Church, called the Saracen’s tomb, a thirteenth-century coffin with a raised cross on the lid.

The church living was granted by Edward VI to Sybil Hampden, who had been his governess, on her marriage to David Penn, the barber-surgeon to Henry VIII.

Sometimes one arrives hot and weary with climbing the long hill to Penn. In the window of the porch there is always a jug of clean water and a couple of glasses “for thirsty wayfarers,” and we drink and are thankful.” (Buckinghamshire: Pages 8-10)