Did you know that Penn Church Hall opposite Penn Church
(and next to the Crown Pub) started life as a school?

A little while ago, I was hugely fortunate to be in conversation with some of the former pupils of this school, known as Penn Church School. They generously shared their memories and anecdotes of day-to-day school life pre-war and during the war years when evacuees joined local children. In the next newsletters I will document some of these wonderful stories. This edition will focus on the school in the 1920s.

A quick introduction to the building

The eagle eyed might spot the initials H.G.H and the coronet above the gable window. The initials are those of Harriet Georgiana Howe in whose memory a Girls Working School was built by the 1st Earl Howe in 1839. In Tudor style with imported yellow bricks, it was designed by Edward Blore, who later designed the front of Bukingham Palace for Queen Victoria.  From 1870 when their school at Church Knoll was dismantled, and until 1949 when the school closed due to dwindling numbers, boys joined the girls at what became known as Penn Church School. The school was extended in 1910 (probably just after the photo of the children gathered by the door). Just as a note, it seems apt that the Hall is now home to another school, Little Oaks One Nursery.

At this time Penn Church School was attended by around 60 children from the ages of 4/5 to 13/14. Everyone walked to school without their parents and in all weathers – indeed this was the case throughout the school’s history. The group from Forty Green would walk through fields except when it was very muddy when they would use Paul’s Hill – either way quite a distance for a 4/5 year-old to walk! Some might wear the “Penn C of E” school badge on a blazer if they had one. One contributor recalls that the only day they missed was when the path by the Vicarage was like a “sheet of ice”. The day started at 9, sometimes with “drill” (physical exercise). At mid-morning break, on a very cold day, cocoa and sugar was mixed together by one former pupil and brought from home in an OXO tin. There was no running water. Water was either pumped from a well or drawn from the storage tank in the loft, which “tasted horrible” but on a more positive note a hot lunch of stew, shepherd’s pie or sausages and mash (a favourite) would sometimes be served at the Parish Rooms, no. 4 Church Cottages, adjacent to the Church on Paul’s Hill. This would be organised by Mrs Murray from the big house close by, The Knoll.

The schoolroom and lessons

The main room in the now Church Hall was then the large schoolroom, partitioned so that infants were separated from the slightly older children. The older children would be taught by the then Headmistress, Miss Dawson. They would sit two to a desk, backs to the partition and facing the fire which would be lit in the morning by the caretaker and then taken care of by older boys. Miss Summers was the infant teacher where there were “scribbles and painting… to get us into the hang of being away from home.” Children graduated from writing in pencil to pens with detachable nibs and inkwells. T he older children, “as they got on” would help with the youngsters. There was no homework. Children who misbehaved might be sent into the North Room (a smaller room at the back of the building), but generally behaviour was good.

A Church school at the heart of the community

The decade before, the headmaster would live in, in rooms above the school (now the Parish Office.) Miss Dawson would lodge at the public house next to the school, The Crown, and be taken by “taxi” (usually the Baker’s van) to stay with her sister at the weekend. Other notable figures at the time were the attendance officer on his bike, the inspector Mr Mumford, later the vicar of Holy Trinity, and the nurse, “the bug nurse!” Naturally, for a Church School, links with the Church were strong. Mrs Winter, the organist’s wife, took Sunday school and children might also be involved in bell-ringing or choir and a nativity, attending Church several times on a Sunday (and walking there). One of the accompanying photos shows that the children took part in a local fête, making costumes for the occasion. There was scripture and a hymn over at the school each morning, accompanied on the piano. Some sports, including “baseball” and  football, formed part of the boys curriculum whilst girls did needlework. There would be coveted prizes for different school subjects including the best kept garden patch (round the sides of the school site), a drawing prize and the Bishop’s Prize for Scripture. 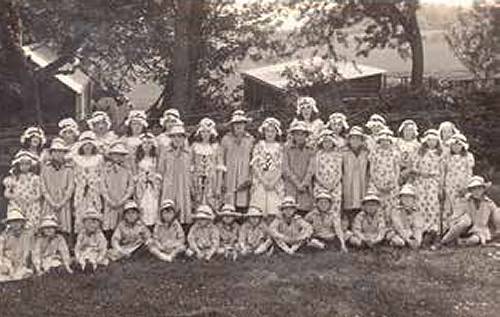 Penn Church School pupils, some reluctantly, dressed as shepherds and shepherdesses for a local fete in the early 1920s. 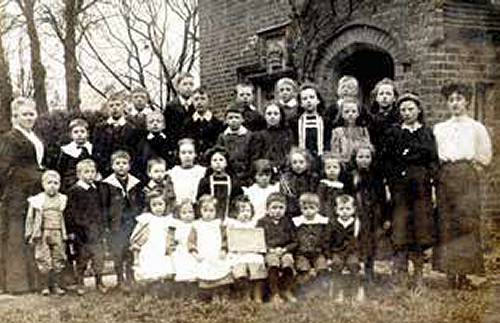 An evocative school photo from Edwardian times, before the 1910 extension.
(Thanks to Eddie Morton & Miles Green for finding this).

Particular thanks to Mr Herbert Druce, a parishioner, who recently celebrated his 104th birthday and who attended from 1921. Parts of our conversation are directly reported above and he shared with me the fête photograph in which he appears. Herbert’s memories of Penn Church School are overwhelmingly positive, “I enjoyed it… the teachers were so caring.”

If anyone has association with Penn Church School please do contact me, Zoë Clark, via the church office on 01494 813254, or office@holytrinityandstmargarets.co.uk