This is an unusually interesting and helpful response to a request for information from a Canadian lady who knew only that one of her forebears, Thomas Harley,  had been employed as a gamekeeper at Penn House.  Earl Howe, the descendant of the gamekeeper’s Victorian employer, and Ron Saunders, one of Penn’s historians,  joined forces to give her a description of the significance of Gamekeeper Thomas’s role ; a detailed description of  the wedding of Thomas’s son, another Thomas, in 1918, by someone who was actually there;  confirmation that the second Thomas was also a Penn House estate gamekeeper since he lived at Keeper’s Cottage in 1939; and then a description of Norman, the third generation Harley, by Earl Howe his employer, who not only knew him, but spoke at his funeral in the 1990s.  Details of children and burial plots were an added bonus.

And Phyllis May Harley née Beale 8th May 1897- 18th December 1949
I was wondering if there would be any records of staff who worked at Penn house and if so where i could find them? I live in Canada so rely on the internet for my research.  Thank you so much, and again what an amazing site.

Earl Howe:
I wish very much that I could provide you with some substantive information relating to your twice-great grandfather. Regrettably, however, staff records of those who worked on the Penn Estate during the nineteenth century have not survived. Your information that Thomas Harley was a gamekeeper (in fact probably one of several) is extremely interesting, as it underlines the importance that my family attached to shooting on the Estate at that time. In fact, the heyday of the Penn House shoot came a little after your ancestor’s death, between about 1895 and 1906, when there were visits by members of the British and continental royal families, together with leading members of the aristocracy, for shooting weekends. Nevertheless, Thomas Harley would probably have been one of those who were instrumental in establishing Penn as a highly desirable shooting venue, including the establishment of strategically placed woodland plantations, designed expressly to enhance the shooting experience. You will probably be aware that the shooting of game birds, especially but not exclusively pheasant and partridge, became a highly popular winter pastime in this country from about 1870 onwards. (It remains popular to this day, though on a much smaller scale.) 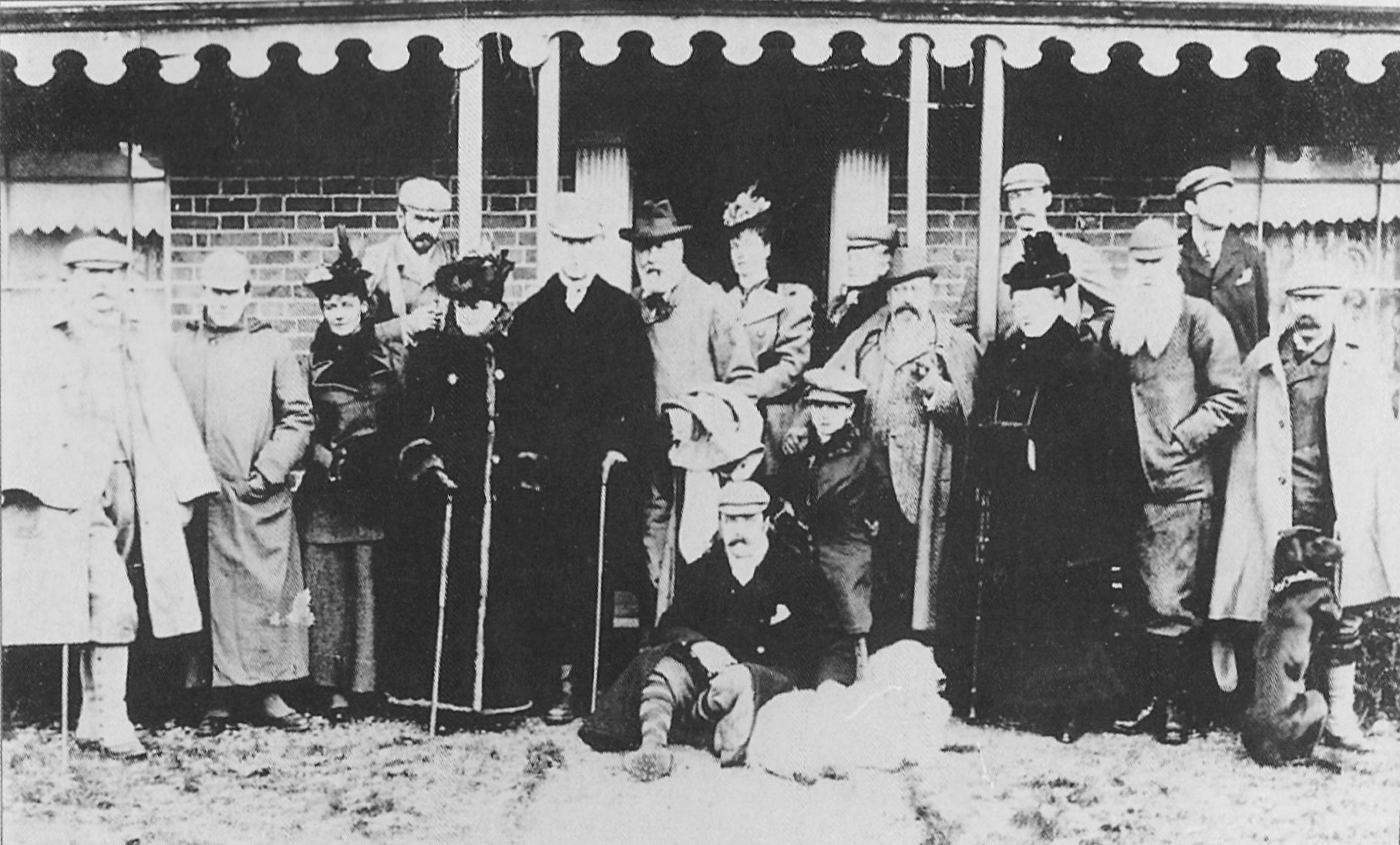 In the village archives there are extracts from a diary written by Maude Smith of Elm Road Penn, covering some of the years of the Great War, she was a friend of Phyllis May Beale who married Thomas Harley in Holy Trinity Penn in January 1918 and was a guest at their wedding which she recorded in some detail in the said diary.

Extra special day today! In morn I hurried up, & got leg done early & dressed & started for Penn Church at 10.30, to see May’s wedding. The wedding party, walked & past us on the road. The roads were fearfully muddy, it was hard work for poor Elsie. We arrived in Church, just as the service commenced. Mrs Church was there also Harry. Fancy! Harry there, and he used to go with May. May & Tom got through their part alright; it was soon all over. May looked very nice in a navy-blue costume, & white silk blouse; & such a pretty pale pink hat. She had her hair crimped nicely & she looked alright; & quite happy, so did Tom. Then we all came home to Beales, & had a jolly nice time. Oh! it does seem so funny, to think that May my dear old playmate is now Mrs Harley. I did not like to go into Beales at first, so stayed in Mrs Saunders till May came & fetched me out. So then I got on alright afterwards. They put the gramophone on, but it made an awful row at first, as it was damp, (the records were). We had drinks, biscuits, chocs & nice things galore! After a time, we all marched into Mrs Saunders for dinner. Such a lovely dinner. We all thoroughly enjoyed it. I had cold ham, & baked potatoes & green peas. This was followed by lemonade, & Xmas pudding. May & Tom seemed very very happy all day, & everyone says how well matched they are. After dinner, we went back into Beales & had the gramophone on again. The house was simply crowded. All the kids had their meals in Beale’s house. Bob & Elsie came in aft, & lots more folks arrived. The talking & gossiping & merrymaking well! It’s a wonder my head didn’t ache! Later on we all marched into Saunders for tea. My word what a tea!! Such heaps of everything, could not get through half the grub, & then May never cut her lovely big wedding cake. Such a beauty, with fancy roses on the top, & a wee little doll called “Marmaduke”. Great fun was caused by that. In fact, May & Tom had to put up with a great deal of chaffing! Mr Beale was well awa’ with himsel’ & enjoying himself fine, being fussed up by his nieces who had been bridesmaids. Jenny & Alice Harley, were the little bridesmaids, dressed all in white, with blue sashes & white hats trimmed with blue. They both looked very nice. After tea more guests kept arriving, & biscuits & drinks kept coming round. Mrs Nance Beale kept making us laugh, so did Mrs Louis (Lewis) & when old Will Wheeler, well! We all kept roaring, with laughter. As he’s enough to make a cat laugh! Everybody was sorry he had to leave us early, at 9pm. We had supper first & more drinks & bon bons. I had ham sandwich followed by lovely cold mutton sandwich. Enjoyed it fine! Mum came along about 6.30 & brought me a letter which had come by post for me. It was quite a strange handwriting & was from the Straits Settlements Federated Malay States. The girl (Alice Vaz) wishes me to correspond with her. She wrote a very nice letter. She says a friend gave her my address so I can’t imagine who that can be; Miss Benson had brought me along a nice ¼ lb lovely fresh butter, & Mrs Hancock had sent my nightgown along; I found when I got home at 11 o clock. Dad & the kids were in bed so Mum & I had a cup of coffee together to end up with. It has been a most enjoyable day. I do hope May will have the best of luck & a happy life in her married life. It is just one year today, since poor Alice died. It does seem a coincidence that May was married today.

Tom Harley was born in Penn in 1890 he worked as a cowman on a farm and lived with his widowed mother, Emma.

11-year-old Jenny was in fact Margaret Jennie Beale, the bride’s youngest sister and 12-year-old Alice was the groom’s niece.

This should be Mrs LEWIS. Esther Lewis, who was a witness to the wedding, was born Esther Collins in Hazlemere in 1890. The middle of the seven surviving children of George and Elizabeth Collins she married Bert Lewis in 1907. Bert was an upholsterer by trade, working for both Randall Brothers and Wm. Bartlett and Sons in Wycombe.

In 1915 he enlisted in the Wiltshire Regiment and was killed at Gallipoli in October of that year He is remembered on both the Hazlemere and Tylers Green War Memorials. By January 1918 Esther, presumably was re-building her life, only to be hit hard again, just three months later, when her youngest brother, Walter Stanley Collins was killed, only 18, he was serving with The Duke of Cornwall’s Light Infantry when he fell on 12th April 1918, he is remembered on the Loos Corner Cemetery and locally in Hazlemere. Esther did eventually re-marry, this time to George Page in 1920.

A reference to Lydia Alice Church who had indeed died in January 1917 another young victim of pulmonary tuberculosis.

Probably the aunt of the bride

Earl Howe:
When I first arrived at Penn in 1986, my assistant cowman/tractor driver at Penn Street Farm was Norman Harley.  Norman was the most amenable of men. Content with his lot, always smiling and never complaining. This was best exemplified when, one day, he was driving an old tractor over very uneven ground and accidentally amputated the end-joint of a finger when the tractor lurched sideways and knocked against a tree. All Norman did was bandage up the finger and carry on with his work – still smiling! He retired at 65, having worked on the Estate for very many years – probably ever since leaving school. I spoke at his funeral in the 1990’s.

With thanks to Linda Gould, Earl Howe and Ron Saunders, July 2022.